As part of this Memorial Day weekend Balladeer’s Blog continues its examination of neglected areas of United States military history.

Comment: The Oneida Nation of Native Americans were America’s first allies. During the Revolutionary War most Native American tribes sided with the British but the Oneida Nation, under Chief Shenendoah, led his people to ally themselves with the emerging United States. The Oneida alliance with the U.S. therefore PREDATED France’s recognition of an independent America.

The Oneida warriors fought alongside American forces throughout upstate New York, most notably at the Battles of Oriskany and Saratoga. They also provided desperately needed food and medical supplies for the Continental Army during the terrible winter at Valley Forge. Two treaties were signed and honored to this very day regarding Oneida sovereignty, retention of their land and a yearly ceremonial delivery of bolts of cloth to the Oneida leaders. That ceremony continues once a year.

Comment: This unit of the American Army was named for its leader, Alexander William Doniphan, who had served in his native Missouri’s Mormon War of 1838. Though Doniphan led troops against the Mormon forces he was instrumental in sparing the life of the Mormon leader Joseph Smith, whom his men had captured.

In the Mexican War Doniphan led his eponymous “Thousand” in the longest geographical campaign since the days of Alexander the Great. Doniphan’s Thousand was with General Kearney when he took Santa Fe and in December they defeated  Mexican forces at El Brazitos on Christmas Day. Later, outnumbered four to one, Doniphan’s Thousand crushed the Mexican Army at the Battle of the Sacramento. They even linked up with the main army in Mexico and paraded before General Zachary Taylor before returning to the United States amid much acclaim. 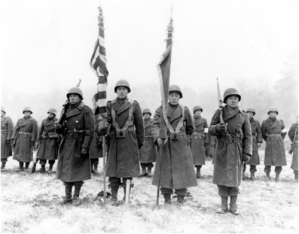 Comment: In one of history’s greatest ironies over two thousand Japanese Americans served in the United States Army during World War Two. They willingly served despite the internment of so many Japanese  Americans in our nation’s only example of that repulsive practice implemented by so many nations at war both before and since.

The 100th Infantry Battalion, also known as the Nisei Battalion or “the Yankee Samurai”, had to endure a long period of “testing” before they saw combat. That was because of the detestable bigotry of various officers in higher command. The 100th saw its first action on September 29th, 1943 in Salerno, Italy and against Germany’s Gustav Line in Monte Cassino. The Nazis’ contempt for the Japanese Americans was overcome the same way the suspicion and prejudice of the Nisei’s own military superiors had been. The 100th also fought at Anzio and Rome, with 21 of its members earning the Medal of Honor and the entire unit being awarded the Congressional Gold Medal.

Comment: This Continental Army unit is often remembered as a purely African American regiment. Actually, it has even more important status as the first INTEGRATED unit in American history. Several companies of African Americans served alongside white companies and the world did not come to an end over it. As a Rhode Island regiment the First was under the overall command of General Nathanael Greene.

The First Rhode Island and its constituent units served all the way from the siege of Boston in 1775 to the New York Campaign in 1776, at Fort Mercer (1777) and at the Battle of Rhode Island (1778). In 1781, General Christopher Greene, Nathanael’s cousin, was killed in a battle between the First and a unit of British Loyalists. Those British  Loyalists went on to mutilate Greene’s body as “punishment” for having black troops under his command. Later in the year the First Rhode Island even served in the Yorktown Campaign which led to British General Cornwallis’ surrender.