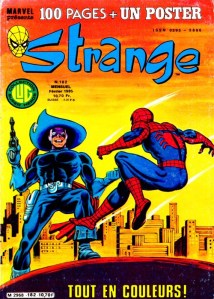 Foolkiller (Greg Salinger), his Purification Gun and Thou (Spider-Man)

It’s a superhero-crazed world these days and Balladeer’s Blog’s “Script Doctoring” of Marvel’s handling of Foolkiller continues with Part Eight.

My alternate treatment of Foolkiller this time around features a Marvel Team-Up with Spider-Man.

These blog posts have proven so popular that Stan Lee is ALREADY stealing credit for having written them. 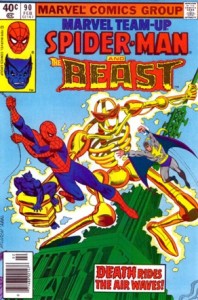 This tale would be set during the down-time Foolkiller (Greg Salinger) and the other Defenders had after defeating Mandrill, Mutant Force and Fem-Force. Originally this was a team-up between Spidey and the Beast, but those two had plenty of team-ups together.

I would throw in Foolkiller instead. Greg in his civvies would find his way to Empire State University to hear a talk by a famous author or some such thing. Peter Parker would – as in the real comic book – be there with Cissy Yronwood.

As in the original story the supervillains Modular Man and Killer Shrike would strike, attempting to steal some microwave-oriented tech on display. Peter Parker and Greg Salinger would slip into costume and it would be Foolkiller using his agility and the white energy blasts from his Purification Gun to help Spider-Man against the pair of villains.

As the battle rages it would emerge that Killer Shrike has amnesia (the truth) and Modular Man would lie and claim he wanted to just use the microwave tech to cure himself. Kind-hearted Spidey would get suckered in by it but Foolkiller would try to continue the battle against the villains. Spider-Man would try to stop him and the two would end up fighting. (I figured I would reverse the usual Marvel Team-Up formula of the heroes fighting each other first, then the villains.)

The battle between Web-Head and Salinger would be interrupted by Modular Man, who by now would be steadily growing and would reveal that – all along – his plan was to use the microwave tech to increase his power, not cure himself. Foolkiller and Spider-Man would call a truce and resume fighting the villains.

Foolkiller would spare Killer Shrike since dialogue would make it clear he was telling the truth about his amnesia. Spidey would subdue Killer Shrike while Salinger fought it out with the growing Modular Man and kill him, much to Peter Parker’s disgust. (Since this 1980 story was the last appearance of the Modular Man to date I figured why not have him die at Foolkiller’s hands.)

The two would go their separate ways with Spidey reflecting that the Defenders allow a lot of dangerous characters on their team. +++

My alternate version of Foolkiller’s actions in The Defenders # 84 will be explored NEXT time around.

I’LL PICK UP FROM HERE WITH THE NEXT INSTALLMENT IN THE NEXT DAY OR TWO AS TIME ALLOWS.