Balladeer’s Blog continues its examination of this epic myth of the Nyanga people. 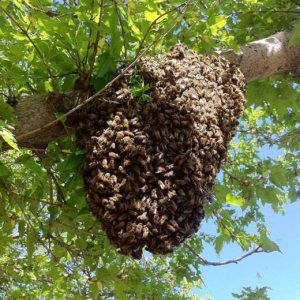 After spending another night with Kahindo, the goddess of good fortune, the semidivine hero Mwindo reported to the hut of the death-god Muisa the next morning.

The new “impossible” task that Muisa commanded Mwindo to carry out was the harvesting of honey from the deadly African honey-bees in the land of the dead. If the hero succeeded in this task the death-god promised to reveal to him where his evil father Shemwindo was hiding. If he failed then Muisa would kill him and he would never leave the realm of the dead.

Mwindo was directed to the dead tree where the huge swarm of Muisa’s bees had their hive. Singing another of his song-spells Mwindo intimidated the bees from interfering with him as he began to harvest their honey. One of the dead souls who served as spies for Muisa throughout his kingdom observed all this and raced back to inform the deity.

Muisa was furious when he received the news. Once again the loud and boastful Mwindo was going to survive one of the death-god’s traps. Muisa sent his mystical karemba belt flying off on its own to attack Mwindo from behind.

When the karemba belt arrived at the tree where Mwindo labored at collecting the honey it wrapped itself around the hero’s arms to prevent him from using either his axe or his conga-sceptre (a riding-crop sized staff made of antelope tail). The karemba belt then stuffed Mwindo bodily into the trunk of the tree, entrapping him in it with only his head sticking out from the top. The semidivine figure’s head drooped as if he was dead.

In fact Mwindo was in so death-like a state from Muisa’s latest attack on him that the half of his magical rope that he had left with his Aunt Iyangura back in the land of the living ceased moving. Iyangura began weeping at the sight of the life-token falling motionless, knowing it would indicate Mwindo had died during his adventure in Muisa’s underground realm.

Back in the land of the dead Mwindo managed a last spark of life and opened his eyes. Unable to breathe with the tree firmly entrapping him he would never be able to complete a song-spell. Instead, with his last breath he called upon his new ally the lightning god Nkuba to free him.

The quick-tempered Nkuba was always glad to unleash his lightning bolts on any target. Looking down from the heavens he struck the tree that held Mwindo, bursting it into several pieces but leaving the semidivine hero unharmed.

Topside, in the ruins of Tubondo village, Iyangura rejoiced as the rope began vibrating again, indicating that Mwindo still lived after all.

After thanking the lightning god for freeing him, Mwindo returned to Muisa’s hut with the honey he had gathered. Mwindo demanded that the death-god honor his word and tell him where he could find his evil father Shemwindo.

With no recourse immediately at hand Muisa complied, giving Mwindo directions to the hut where he was hiding Shemwindo. The hero set off immediately to at last enact his revenge on his evil father. +++

I WILL EXAMINE ADDITIONAL PARTS SOON. CHECK BACK ONCE OR TWICE A WEEK FOR UPDATES.

FOR PART ONE CLICK HERE: PART ONE OF MWINDO