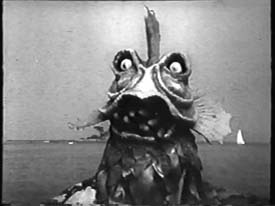 The Cute Mascot for Vibrators-to-Go

Before MST3K there was The Texas 27 Film Vault, hosted by Randy Clower and Richard Malmos. Balladeer’s Blog’s examination of this neglected 1980’s cult show continues. Here’s the 8th review of episodes where an original broadcast date can be determined.

EXTRAS: With 2 1/2 hours to work with every episode our machine-gun toting “Film Vault Technicians First Class” Randy and Richard had plenty of time to show (and mock) episodes of old Republic serials before showing (and mocking) the night’s bad movie. Before Horror of Party Beach our boys showed an episode of The Phantom Empire, in which Gene Autry played a singing cowboy  who saves the world from an advanced underground civilization complete with killer robots. 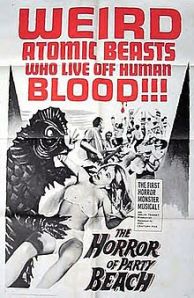 Also, a comedy sketch (which Randy Clower told me he still has footage of) from the episode featured Richard jamming a bunch of hot dogs in his mouth to resemble the absurd, multi-tongued sea creatures in Horror of Party Beach.

FILM VAULT LORE: Special thanks to my fellow Texas 27 Film Vault fan Jana for the date of this episode and which serial preceded the movie. She did not remember which  chapter of the serial Randy and Richard were on, but you can’t have everything!

Here’s more in Jana’s own words: “My boyfriend and I at the time were at SMU and on Saturday nights everybody on campus was partying so much we had no peace and quiet to watch Randy and Richard’s show. After a while it was  Memorial Day weekend and The Texas 27 Film Vault had only been on for about 3 or 4 months by then so my boyfriend was the only other person I knew who watched it. We were both staying at his parent’s place for the summer. We had gotten into the habit of going to his parents’ place nearby on Saturday nights to watch Randy and Richard and we did again that Saturday night. We did it a lot more times after that. We loved the show and wished it had lasted more than the few years it did.”

THE MOVIE: Horror of Party Beach is one of those flicks that is on EVERYBODY’S Worst Films of All Time list and has been for several decades. In the 1980’s the Medved Brothers’ books on Golden Turkeys helped secure its reputation. Just about every Movie Host show has presented this film at some point.

Radioactive waste dumped in the sea spawns a tribe of large, goofy-looking, carnivorous sea monsters who walk on two legs and have so many big tongues they seem to have bouquets of hot dogs in their mouths. The monsters, referred to as “zombies”

even though that’s NOT what they are, are eventually destroyed with salt. That solution was recommended by Eulabelle, a black maid who plays the African American stereotype so broadly that even Mantan Moreland looks like Samuel L Jackson compared to her.

The overall feel of this black and white cult classic is a sort of “Frankie and Annette Crossed With Frankenstein Meets The Space Monster” vibe. There are plenty of beach bums, a biker gang and lots of memorably odd rock songs  provided by The Del-Aires. So much has been written about this quintessential example of “fun-bad” schlockers of the past for me to add anything new at this point.