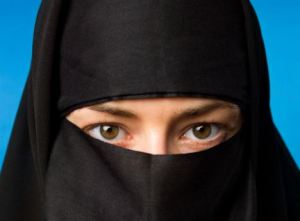 THE BURQA (2013) – The Burqa deserves to be THE action film of the year. This movie has a daring premise, incredible stuntwork plus more killings and blood squibs than any three Quentin Tarantino movies put together. There’s also an unforgettable performance by the lead actress, whose name is being kept a secret over fears of violent reprisals from Islamist terrorist groups.

The film is set in modern-day Iraq. Our heroine,  known only as “The Burqa”, emerges from the desert sands, clad in the outfit she is named for and with automatic weapons strapped to each of her sashaying thighs. Like Clint Eastwood’s Man With No Name and John Garko’s Holy Ghost, both from Spaghetti Westerns, the Burqa is an unstoppable gunslinger who litters the land with her fallen foemen.

The audience first meets the title figure when she saves a teenage Muslim girl from being raped and killed by Islamist fanatics for daring to dress in western clothing and to advocate abortion rights. Countless bullets and several dead Islamists later, this pre-credits teaser ends with the rescued teen plaintively asking her savior “Why? … Why doesn’t the rest of the world care about our  struggle for freedom? Why do they ignore the war on women being waged by Islamist forces?”

By way of a reply the Burqa merely gazes off into the distance before finally remarking “They don’t even care about the fate of Muslim women who live within their own borders. The suffering of our sisters is ignored and their cries for justice go unheard by politicians courting the votes of our men in the countries they have migrated to. What we do, we must do … alone.”

More accurately, the Burqa herself does what she does “alone” as she roams the post-apocalyptic landscape, bitterly noting the ruins of the freedom promised by the western nations. The same nations which abandoned her and her sisters years before their liberties could be cemented. During fight scenes in which our heroine blows away numberless throngs of patriarchal Islamist oppressors she sardonically comments on the western world’s way of growing bored with the problems of women in the Muslim world.

She makes bitter comparisons with how many decades of struggle it took even to secure the freedom of African American slaves after the United States Civil War as opposed to the short amount of time the western democracies devoted to the new freedoms of women in Iraq. The Burqa spits out these observations with the same deadly finesse with which she riddles the bodies of Islamist misogynists with bullets.

I wouldn’t dream of blowing any of the film’s surprises with spoilers, suffice it to say director Eddie Wozniak’s The Burqa presents a heroic figure you can root for the way audiences rooted for the rebels in the original Star Wars. There’s no Death Star to blow up, and the black-clad gunslinger’s one-woman war against oppression has a decidedly inconclusive final act, but that’s part of the point.

The subtext of The Burqa, despite all the surreal violence and over-the-top body count, is that real-life struggles for freedom don’t have the convenient framework of movies or comic books. True change in the Muslim world would take at least as long as the battle for African-American freedom and equality did in the United States after the slaves left the plantations but faced violence from the KKK and other perils.

In the end the sobering conclusion The Burqa leads its audience to is the realization that the forces of oppression in the world have learned that all they have to do is refuse to change. By obstinately staying the course they know they will prevail in a world which won’t be interested long-term in any conflict that can’t be resolved by one clear, conclusive explosion or death of a main villain.

This is not a real movie of course. Can you imagine the bloodbath if a film like this was made? And if anyone doubts me, prove me wrong. Do a movie or graphic novel like this with the kind of villains I described. I think we all know that won’t happen.