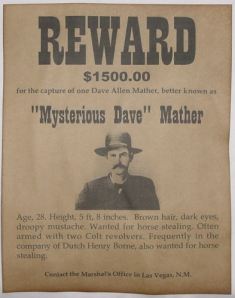 The big names in Wild West mythology get smothered with attention but with Frontierado coming up on August 3rd it’s the perfect time of year to shed a little light on the myths of some of the American West’s neglected figures. Here are six individuals who never seem to get the attention they deserve.

6. THE MORMON KID – No, that’s not a joke, Matt Warner really was known as the Mormon Kid for the religion he left to pursue a wild life as an outlaw. Some traditions still hold that the Mormon Kid got his first experience with gunplay as a Danite, the “Old West Knights” of the Mormon faith. (For a Danite as a good guy see the Tom Berenger western The Avenging Angel. For a Danite as a  bad guy see the bizarre Spaghetti Western John The Bastard.)

Eventually fleeing home, Warner became a rustler operating out of Utah’s Robber’s Roost area in the 1880s. Eventually the Kid met Butch Cassidy, in his early years as a rustler, and later became part of the charismatic Cassidy’s Hole In The Wall Gang when Butch headed off to run his own outfit. The Mormon Kid was involved in shootouts and bank robberies and did a stretch in prison, then went straight (well, except for some bootlegging) and died in bed at the age of seventy-four. Anybody for a prequel movie called Butch Cassidy and the Mormon Kid?

5. TOM BELL – Coming a full generation earlier than most of the legends of the west, Tom Bell served in the United States Army during the war with Mexico from 1846 to 1848. After leaving the army Bell headed to California to particiipate in the Gold Rush. Striking out as a prospector (at least that’s what the ladies tell me) Tom took to the outlaw life, forming a gang of robbers and preying on the gold shipments and payrolls transported by the stagecoaches and teamsters of the area.

Some of Bell’s contemporaries in this often forgotten First Wave of western figures were Lucky Bill, Joaquin Murrieta, Rattlesnake Dick and Kit Carson in his early years. Jailed on California’s Angel Island in 1855 Bell escaped, formed another gang and continued his life of crime. In October of 1856 vigilantes corraled Tom Bell near the Merced River and hanged him.

4. COMMODORE PERRY OWENS – Named after the naval hero of the War of 1812, Owens was one of the few gunfighters of the west to put in time as an actual cowboy and made a name for himself as a gunman driving off rustlers. Drifting into the Arizona Territory in the 1880s Owens took a job at a stagecoach station as a rifleman charged with driving off the periodic attacks by Native Americans. Earning a reputation as a dead shot, Owens was soon being called “The Commodore” for obvious reasons and his reputation started to grow.

Owens next signed on with a railroad contractor as one of the gunmen guarding their construction crews’ horses and wagons. In a celebrated incident the Commodore single-handedly drove off a renegade Apache raiding party after they killed his colleagues. Owens killed at least two of the Apaches and rode the publicity from this event to election as Apache County Sheriff during part of the Pleasant Valley War. After three years of service (1886 to 1889) and several dead criminals, the Commodore hung up his six-guns and his rifle and became a businessman, dying peacefully in 1918.

3. KING FISHER – John Fisher was a neglected gunfighter who acquired the nickname “King” Fisher, because I guess being named for a bird was a sign of true toughness in the west. (I’m kidding!) A native Texan, King Fisher was arrested in his teens for horse theft. Released from prison in 1871 he joined up with several Mexican accomplices and took to rustling, eventually shooting down three of his partners and taking over the gang himself.

Like a Mafia Don of the Texas/Mexico borderlands Fisher led his group of brigands to rustling supremacy in the region, eventually merging several rival gangs with his own and forming a virtual empire after several more dead bodies from inter-gang battles. King Fisher ruled this empire from his “ranch” at Pendacia Creek and formed an alliance with Porfirio Diaz himself. Diaz would bring stolen Mexican beef to the border, where he would swap it for more live merchandise that King’s gang had rustled.

King Fisher wore tiger-skin chaps, obtained when he and some of his boys raided a traveling circus. Partying with fellow neglected gunfighter Texas Ben Thompson in San Antonio, King perished with Thompson when some of Texas Ben’s enemies filled the pair with bullets.

2. DEACON JIM – Also called “Killer Miller”, James B Miller would make a perfect villain in someone’s Frontierado Saga. Deacon Jim was suspected of shooting his own parents to death when he was eight years old, but it couldn’t be proven. He definitely did kill his brother-in-law when he was seventeen. Released on a technicality, Miller became a ranchhand and when his employer was killed he tracked down the parties responsible and gunned them down.

After years of drifting Jim became a town marshal in Pecos, where he jailed few miscreants since a huge number of the people he arrested were “shot trying to escape custody”.

Miller’s outwardly devout Methodist front earned him the nickname Deacon Jim, but all the while his body count climbed, even after he no longer had a badge to protect him. People testifying against Deacon Jim or trying to prosecute him wound up dead and after a shady stint as a Texas Ranger Jim moved to Fort Worth in 1900 and became a killer for hire. This last career led to Deacon Jim being lynched in Ada, OK in 1909 at the age of forty-two.

1. MYSTERIOUS DAVE MATHER – Mysterious Dave really was his nickname. It may seem a bit awkward by today’s standards but there are preserved newspaper accounts from the 1800s showing that it was indeed the handle he was known by. The nickname certainly fit, since little was ever known for sure about Dave’s past or his ultimate fate, but newspaper accounts testify to his reality and to his reputation as a deadly gunman and enigmatic drifter.

Part of Mysterious Dave’s mystique came from the rumor that he was a descendant of Cotton Mather, though it’s hard to see why that would be considered a plus. With his guns blazing and dead bodies falling all along his trail, Mather was known as a rustler in Arkansas in 1873, as a buffalo hunter on the Great Plains in 1874, and as a stagecoach robber and horse thief in the Texas Panhandle and in New Mexico Territory for the following five years.

After prospecting for gold in Gunnison, CO in 1880 Mysterious Dave returned to New Mexico to bust some old pals out of jail. For a time Mather dabbled in law enforcement, and by 1883 was an actual deputy marshal in iconic Dodge City, KS, where skill with a gun and a willingness to take on rowdies counted for more than the particulars of your past.

When his law enforcment career came to an end Mysterious Dave tried his hand at farming, but his temper flared and he shot a man dead  during an argument. Jumping bail, Mather was spotted in New Kiowa, KS and Long Pine, NE before vanishing completely. Some rumors claim he headed north and became a Royal Canadian Mounty, dying in Canada in the 1920s.

© Edward Wozniak and Balladeer’s Blog 2011 and 2012. Unauthorized use and/or duplication of this material without express and written permission from this blog’s author and/or owner is strictly prohibited. Excerpts and links may be used, provided that full and clear credit is given to Edward Wozniak and Balladeer’s Blog with appropriate and specific direction to the original content.