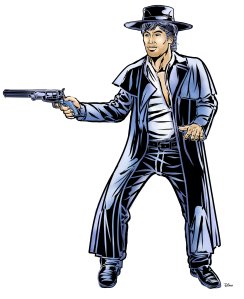 GUNPLAY MAXWELL – This neglected gunslinger was born in Boston, MA as James Otis Bliss circa 1860. When he was 15 years old he got into a fight with a friend at a Boston tavern and shot him to death. Fleeing authorities the young man headed west and began a life of using various false names, including Charles L Maxwell or “Gunplay” Maxwell as he is best remembered.

Life on the run was bringing out both the dark violence AND the shrewd manipulative streak that would characterize the young man for the rest of his life. By late 1876 he was in Texas staying alive through assorted robberies, con games and increasingly frequent gunplay. Texas eventually became too hot for Gunplay Maxwell and by the late 1870s or early 1880s he moved north to Montana.

Ostensibly working as a cowboy Maxwell was a hired gunman for the big-time cattle interests against the upstart sheep ranchers. Depending on the source Gunplay may have fought either against or alongside Kid Russell, who started out on the side of the sheep ranchers but years later wound up working for the cattle ranchers.

From there it was an easy jump into rustling cattle and horses. The 1890s found Maxwell plying the rustling trade in Wyoming and Utah. At one point he and an accomplice (sources vary as to the name) stole a large number of horses and drove them to Nebraska. After selling the horses for big money Gunplay Maxwell double-crossed his partner, skipping back to Wyoming without giving that man his cut.

By some accounts the stiffed partner never saw Maxwell again but by others he tracked the man down only to get shot to death in the resulting gunfight. Either way lawmen managed to corral Gunplay in 1893 and send him to Wyoming State Prison for a three year stretch. While in prison Maxwell met Butch Cassidy, who was also serving time.

When our “hero” was released in 1896 he formed his own gang and turned to robbing banks. Gunplay Maxwell lived comfortably off of bank robbery proceeds for a few years but in May of 1898 a bank job in Springville, UT went awry when a bank employee managed to push the alarm button. A posse pursued Maxwell and his accomplice in a running gunfight to Hobble Creek Canyon.

The pair of outlaws discovered that their third gang member, who was supposed to be waiting there with fresh horses for them, must have been spooked by the sounds of approaching gunfire and fled. Hemmed in, Gunplay and his colleague exchanged even more fire with the posse with the end result that Maxwell was captured, the loot recovered and said colleague was shot to death. (Maxwell refused to name the man so that his wife and children would not know that he was a criminal)

Gunplay was sent to Utah State Prison on bank robbery charges. In 1903 Maxwell helped thwart a mass escape from the penitentiary so the Governor pardoned him and he was on the loose once more. He drifted into Carbon County, UT and hired his gun out to mine owners using their usual violent tactics against striking workers.

Maxwell at first posed as a gunman on the side of the miners but after getting caught passing vital intelligence on to his Fat Cat employers he dropped his pose and openly served management against labor from then on. He also did a little prospecting of his own on the side and in the autumn of 1904 he discovered an ozokerite deposit.

Gunplay’s employers fixed him up with a lawyer and the pair founded the Utah Ozokerite Company. Maxwell and his partner earned their footnote in non-gunfighter history with this move, since the gunslinger’s find turned out to be the largest ozokerite mine in the world at the time.

By this point Gunplay Maxwell was supposedly addicted to morphine following earlier treatment for one of his injuries in a gunfight. He had always been a boozer and a frequent customer at opium dens but the morphine problem on top drove Maxwell to go through his money like water.

In 1906 the outlaw was in Goldfield, NV, serving alongside Diamondfield Jack Davis and other gunmen hired by mine bigwigs to lean on miners attempting to unionize. In that capacity Maxwell clashed with miners and their hired gunmen as well as with local law enforcement, including Deputy Sheriff Virgil Earp. In June of 1907 Gunplay was nabbed for one of his killings but the mine owners pulled strings and he wasn’t prosecuted.

Drifting back to Utah, a hard-drinking Maxwell took the management side in an argument with two labor boosters named L.C. Reigle and a man remembered only as “Mack.” As saloon arguments often do it resulted in a gunfight. Maxwell and Reigle wounded each other and were patched up by doctors. Mack’s ultimate fate is unknown.

Our gunslinger’s partner in the ozokerite business had had enough of dealing with the wastrel Maxwell and his violent, wandering ways. He bought him out, allowing Gunplay to pay his way out of his legal trouble from the gunfight in Helper, UT AND to pay his way off to someplace far away.

Maxwell and his remaining proceeds next showed up in San Francisco by the fall of 1907. Falling back on his con-man talents he passed himself off as a wealthy man named William Seaman and mingled with the city’s richest citizens. A wealthy widow named Bessie Hume fell hard for Maxwell’s “tycoon from the east” act and the two were married in January of 1908.

Gunplay’s morphine addiction and fondness for other substances combined with his increasingly rowdy public behavior soon caused the couple to be shunned by High Society in Frisco. At one point Maxwell stole some of his new bride’s jewelry and pawned it to feed his various hungers. Kind-hearted Bessie forgave her husband’s monumental faults and the two moved to Ogden, UT.

Even with Bessie’s wealth financing his abuse of so many substances Gunplay Maxwell was clearly an adrenaline junkie, too, and missed the thrills of crime and gunslinging. By June of 1908 our hero had returned to an outlaw lifestyle on the side.

He and a man named William Walters were arrested that month for robbing a Wells Fargo stagecoach near Rawhide, NV. Gunplay’s old mining tycoon employers supposedly pulled strings and he was released and never brought to trial.

For the next fourteen months Maxwell divided his time between playing part-time husband to Bessie and running his newly-formed gang of bank and stagecoach robbers.

In August of 1909 Gunplay was in Price, UT, doing recon work for a planned payroll robbery. He encountered Deputy Sheriff Edward Black Johnstone, a lawman he had previously clashed with in Goldfield, NV. One thing led to another and in the resulting gunfight Maxwell wounded Johnstone once or twice (accounts vary) while the Deputy Sheriff hit the outlaw in the elbow and the heart.

Sprawled on the ground, Maxwell struggled to lift his gun to fire again but Johnstone shot him in the lung, prompting Gunplay to drop his gun and say “Don’t shoot again, Johnstone, you have killed me.” Then he died.

Always faithful, his widow Bessie paid to have Maxwell’s corpse embalmed and transported for burial in Salt Lake City. +++

FOR TWO GUNSLINGERS IN THIS SAME MOLD CLICK HERE