FRONTIERADO IS COMING UP ON FRIDAY, AUGUST 4th!

The Frontierado Holiday is about the myth of the Old West, not the grinding reality. The Danites – the gunslinging Knights of the Mormon faith – are an underutilized and underappreciated element of Old West fiction.

The opportunities for action presented to a Danite could start as early as the 1838 Mormon War in Missouri. After that there’s the Illinois Mormon War in the 1840s which ended in the Siege of Nauvoo.

Following that conflict the Mormon Exodus to the West began, with “Deseret” (later called Utah) as the ultimate destination. Danites – like Christian Knights of long ago protecting Pilgrims headed for their “Holy Land” – safeguarded Mormon travelers from attacks by hooded anti-Mormon gangs, from armed outlaws and from various Native American tribes along the way. 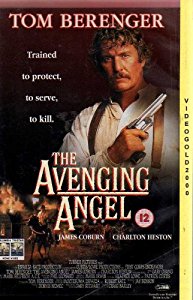 In Deseret itself there were conflicts with Mexican raiders after the end of America’s war with Mexico (1846-1848). Danites would also be called upon to battle various Native American tribes in Deseret, in the role of oppressors rather than oppressed much of the time.

They would also fight Navajo armies to stop them from seizing Paiute Indians as slaves. (The anti-slavery aspect of Mormonism is often overlooked.) Plus the Danites faced the task of driving off armed bands of prospectors wanting the gold and other precious metals of the area.

There was also the Utah War with the Mormons fighting the United States Army from 1857-1858. On top of that add rumored armed conflicts among competing factions of Mormon leaders with the Danites caught in the middle like Mafia gunmen serving their respective “Dons” as it were.

NOTE: This blog post is interested only in the neglected potential of Danites as mythic heroes and/or villains in western sagas. I know that in real life the Mormon Church downplays or distances themselves from the Danites because of the violence often associated with them.

I will use the name Danite as a catch-all term. I know that – often because of oppression or suspicion directed at the Mormons from people outside their faith – the official existence of such armed men protecting Mormons from violence was outrightly denied or hidden under a variety of group names.

In any event these intriguing figures would make for complex or tormented heroes, anti-heroes or antagonists. Readers love the depth of fictional figures who are conflicted with the justness or INjustice of their cause. A Danite could be depicted as a war-weary decent man, growing disillusioned or cynical about the violent calling they dedicated their life to.

On the other hand a Danite could be depicted as a fiery-eyed zealot determined to look out for fellow Mormons to the exclusion of all other concerns. A figure embittered by the very real oppression and hostility the Mormons experienced, especially in Missouri where their opposition to slavery magnified the resentment toward them.

And needless to say conflict among the Danites themselves would also be very fertile creative territory. A Danite beginning to question the legitimacy of their actions could be at odds with another Danite or Danites fanatically opposed to ANY doubts or introspection.

The most accessible example of a Danite as a “good guy” would be Tom Berenger’s performance as Miles Utley in the 1995 telefilm The Avenging Angel. Charlton Heston played Brigham Young in the movie and James Coburn portrayed the most well-known NEGATIVE Danite figure, Orrin Porter Rockwell.

The most accessible example of a Danite as a “bad guy” might be the antagonist who kills the main character in the Spaghetti Western John The Bastard.

I will look at those two movies AND other elements of Danite lore in the next installment.  +++

31 responses to “DANITES: GUNSLINGING “KNIGHTS” OF THE OLD WEST”