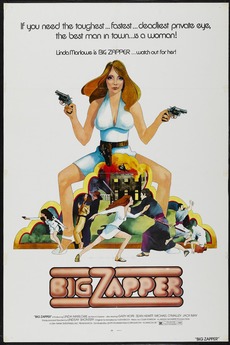 BIG ZAPPER (1973) – Linda Marlowe stars as Harriet Zapper, a two-fisted private investigator, in this first of two Zapper movies directed by Balladeer’s Blog’s old friend Lindsay Shonteff. If they ever build a Museum of Britsploitation Films, Shonteff will have an entire wing dedicated to him.

In the past I’ve covered Lindsay’s various pale imitations of the James Bond movies – Number One of the Secret Service, The Man From S.E.X., Number One Gun, The 2nd Best Secret Agent in the Whole Wide World and others.

Often forgotten were the man’s pair of films about a virtual “Dirty Harriet” with sexy Linda Marlowe as the lead. I’ve read some reviews that bash Marlowe’s performance as Harriet Zapper but all I can say is those critics must never have seen Lindsay Shonteff’s other film projects. NO actor can come off looking talented under Shonteff’s direction.

Big Zapper finds millionaire Jeremiah Horn (Jack May) hiring Harriet Zapper to find his missing son and daughter. Harriet dives into the investigation and learns that both of the teens were murdered by the criminal organization of a psychotic gangster called Kono (perennial Shonteff villain Gary Hope). END_OF_DOCUMENT_TOKEN_TO_BE_REPLACED