WILLIAM HENRY HARRISON FOR THE SHORTEST DAY OF THE YEAR 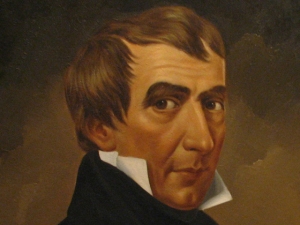 Balladeer’s Blog’s annual Shortest Day of the Year post features William Henry Harrison, America’s 9th President and the man whose term was the shortest – just 32 days. Then he died.

Harrison’s military and political career on the way to the White House is well known so I’ll focus on some of the less-covered aspects of his presidency.

Secretary of the Treasury – Thomas Ewing. Foster father and, in an odd twist, eventually the father-in-law of General William Tecumseh Sherman.

Attorney General – John J Crittenden. Advised against paying interest on a claim of damage caused by then-General Andrew Jackson in 1818. This was 1841 when he finally cleared up this case which had been lingering over 20 years.

Postmaster General – Francis Granger. Once said “When the sun does shine, white’s your wine” and meant every word of it, dammit!

*** Harrison’s death in 1841 after being elected in 1840 kicked off the ridiculous – and thankfully now invalid – superstition that all presidents elected in a year ending in zero would die in office.

Through sheer chance of course, Abraham Lincoln, elected in 1860, was assassinated in 1865, early in his second term.

10. JOHN TYLER – Motto: “Because Tippecanoe and Tyler, Too made for one kick- ass campaign slogan!” *** Nickname: END_OF_DOCUMENT_TOKEN_TO_BE_REPLACED