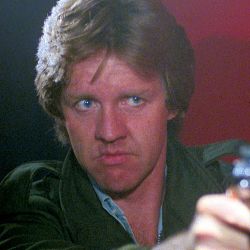 The world fell in love with him as “Artichoke Picker” in Bound For Glory and the rest, as they say, is history! All kidding aside, I think Robert Ginty’s actual life was a hell of a lot more entertaining than any of his movies or television shows. As a musician he performed with Hendrix, Hooker and others. In his acting career he showed up in some high quality productions.

However, this is Balladeer’s Blog, so I’m taking a look only at a handful of Robert Ginty’s less-than-terrific action flicks which have made him a very familiar face to the Psychotronic-minded. I may be ” … in over my HEAD heahh” as our hero said in Warrior of the Lost World, but I’m taking a stab at the rundown for a Robert Ginty B-Movie Marathon. 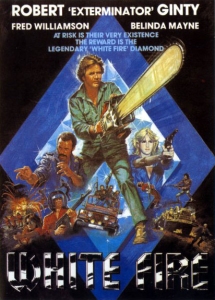 WHITE FIRE (1985) – CASTING DIRECTOR: Let’s see … the hero of this Turkish-made action flick is an international smuggler who uses a chainsaw to fight rival criminals and is so hot for his own sister that he eventually pays to have a prostitute transformed via plastic surgery into a duplicate of his sister then oinks and boinks with her … (snaps fingers) Get Robert Ginty on the phone, NOW!

Ginty plays Boris “Bo” Donnelly. As a child he and his sister Ingrid (Belinda Mayne) saw their parents slaughtered by ruthless criminals. After that they were raised and tutored, Fagin-style, by an older crook who trained the siblings to become expert smugglers on the international scene.

Bo and Ingrid are among the many criminals vying for the White Fire Diamond, a jewel which actually turns out to be radioactive (don’t ask). Moustaches are EVERYWHERE as Ginty teams up once again with his Warrior of the Lost World co-star Fred Williamson to battle a virtual UN of facial-hair styles. Odd-colored blood flows from wounded human beings, lesbian cultists perform underground plastic surgery and Bo Donnelly openly ogles his sister’s naked body every chance he gets. 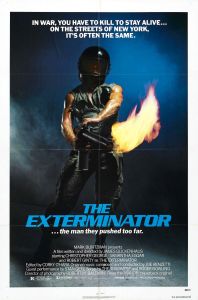 THE EXTERMINATOR (1980) – How can you NOT like a movie in which a standard bad-ass street vigilante uses a FLAME THROWER to kill the criminals he targets?

Robert Ginty IS John Eastland, a Vietnam War veteran who takes the law into his own hands when his ex-GI buddy Michael Jefferson (Steve James) falls victim to street punks. Apparently deciding that guns are for pussies, Eastland uses an actual damn flame thrower to kill evil-doers during his nocturnal crusade. (“I know what you’re thinking … Does his flame thrower shoot flames six feet or only five?” Had to be said.)    END_OF_DOCUMENT_TOKEN_TO_BE_REPLACED