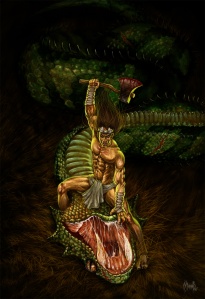 THACH SANH – A son of the supreme deity Ngoc Hoang. His father forced him to incarnate as a human and in this demi-god form he fought monsters, rescued the son of the chief sea god Long Vuong, vanquished his evil foster-brother and married a beautiful princess.
***
He then went on to lead her father’s people in a war of conquest, uniting the legendary and traditional “original 18″ villages (though some sources say 15 villages) that were the basis of the nation that eventually grew into ancient Vietnam.
***
The number 18 has special significance in Vietnamese mythology, like the number 8 in Shinto myth, 16 in Yoruba myth, 4 in Navajo myth, 5 in Discordianism and 12 in many western belief systems. There were also said to have been 18 rulers in the possibly non-existent Hung Vuong Dynasty. For another example, Ngoc Hoang and the heavenly deities were said to live in the 18th Heaven above the 18th Heaven (AKA the 36th heaven, a name used in some English translations)
***
Thach Sanh is said to have END_OF_DOCUMENT_TOKEN_TO_BE_REPLACED