NOTE: For anyone unfamiliar with the way Marvel licensed the rights to Fu Manchu and other Sax Rohmer characters and with the differences between the novels and Marvel’s use of Shang-Chi as the son of Fu Manchu I covered the first twelve issues HERE.

Synopsis: Still rooming with Flash Thompson after the destruction of his and Harry Osborn’s old apartment, Spider-Man is swinging around New York City one night. He comes across a robbery at the Guggenheim Museum and attacks the robbers.

That gang of criminals are secretly operatives of Fu Manchu and use their martial arts skills and weaponry against Spider-Man. He overcomes them all and when he interrogates one of them about who they work for, the thief does as ordered by Fu Manchu and instead claims he works for Shang-Chi. (Part of Fu Manchu’s plan is to pit his son Shang-Chi against Spider-Man.) END_OF_DOCUMENT_TOKEN_TO_BE_REPLACED

With the movie Shang-Chi and the Legend of the Ten Rings trickling out, assorted readers have been asking me if I’ll do a blog post about the character. I did one back in June, but the release of the movie wound up getting delayed. Below is the link to that blog post in which I examined the first twelve Shang-Chi stories in the 1970s.

With the first trailer for the next Marvel Comics movie, Shang-Chi, out already, here’s a look at the first twelve  Shang-Chi, Master of Kung Fu stories. 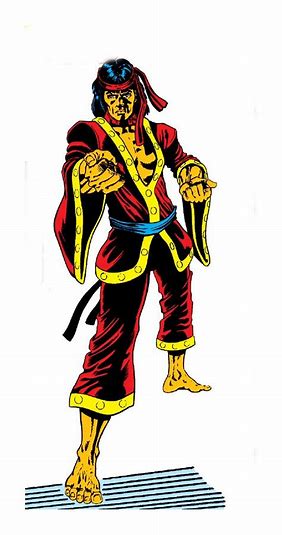 First, a little background information. In the early 1970s Marvel was experimenting with hybrid titles that would combine the old and the new by fusing licensed properties with unique Marvel twists.

The most famous and longest-lasting example was Shang Chi, Master of Kung Fu. In 1973 Marvel licensed the use of Sax Rohmer’s Fu Manchu plus other characters from the Fu Manchu tales. Rather than just churn out a Fu Manchu comic book series “the House of Ideas” instead combined it with the Kung Fu craze of the time and created Shang Chi, the son of Fu Manchu.

Shang Chi, as a surrogate Bruce Lee, and Sir Denis Nayland-Smith, as a surrogate Braithwaite from Enter: The Dragon, were the core of the new series. Shang Chi started out as an operative of his evil father Fu Manchu, but realized the error of his ways and threw in with Sir Denis and his team to battle his father’s malevolent schemes.

Synopsis: One night Shang-Chi, the son of the insidious Dr Fu Manchu, penetrates the Mayfair home of his father’s old enemy Dr Petrie and, though he hesitates when he sees how old the sleeping man is, kills him as ordered. A wheelchair-bound Sir Denis Nayland-Smith, Fu Manchu’s archenemy, arrives in the bedroom too late to save his longtime ally Dr Petrie but is holding a gun on Shang-Chi.

Shang effortlessly disarms Sir Denis and turns to leave, only to be amazed at the way Nayland-Smith is weeping over the dead doctor. He engages Denis in a conversation about why the Britisher has opposed his father for so many decades. Shang-Chi is disturbed by the passionate conviction with which Nayland-Smith describes his father’s global activities, activities that Fu has kept hidden from his son.

What really piques our hero’s curiosity is when Sir Denis shows him how Fu Manchu had him abducted recently in Burma and tortured until he could no longer walk, thus confining him to a wheelchair. Conflicted, Shang-Chi goes to Honan, China to visit his mother and question her about his father’s true nature. She informs him that what Nayland-Smith said is true, but she had hoped her son would not learn the truth until he was much older. (Shang was around 18-19 years old as this series started.)

Determined to confront his father about his lies, Shang-Chi fights his way through his father’s international headquarters, decorated in priceless Chinese artwork and other fineries. After overcoming all of the guards barring his way, our hero faces a gorilla that has been biologically mutated by Fu Manchu. Even this creature is overcome. END_OF_DOCUMENT_TOKEN_TO_BE_REPLACED