While we all await further details and clarification from yesterday, let’s indulge in a look at an often neglected character from escapist fantasy – the superheroine Red Ann from Nedor Publications. 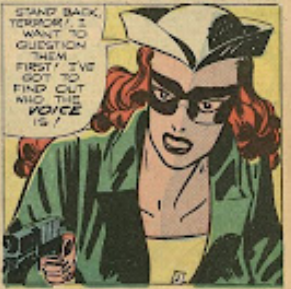 Secret Identity: Ann (last name never revealed). She was created by Jerry Robinson so Ann Robinson would make a good name for her.

Origin: When Ann was in her early twenties she was a beautiful lady pursued by several men. She married an older but not elderly man named Bart (no last name ever given). On their honeymoon in Maine (Maine?) a gang of thugs employed by a supervillain called the Voice murdered Bart before her eyes, then drove off, leaving her there in tears.

After Bart’s funeral, Ann’s desire for revenge against the Voice prompted her to cut all ties with her family and friends, even former suitors. She taught herself marksmanship with handguns and learned how to fight. Adopting the costumed identity of Red Ann she set out to take down the Voice’s criminal empire and kill him for the murder of her husband. END_OF_DOCUMENT_TOKEN_TO_BE_REPLACED