While we all await further details and clarification from yesterday, let’s indulge in a look at an often neglected character from escapist fantasy – the superheroine Red Ann from Nedor Publications.

Secret Identity: Ann (last name never revealed). She was created by Jerry Robinson so Ann Robinson would make a good name for her.

Origin: When Ann was in her early twenties she was a beautiful lady pursued by several men. She married an older but not elderly man named Bart (no last name ever given). On their honeymoon in Maine (Maine?) a gang of thugs employed by a supervillain called the Voice murdered Bart before her eyes, then drove off, leaving her there in tears.

After Bart’s funeral, Ann’s desire for revenge against the Voice prompted her to cut all ties with her family and friends, even former suitors. She taught herself marksmanship with handguns and learned how to fight. Adopting the costumed identity of Red Ann she set out to take down the Voice’s criminal empire and kill him for the murder of her husband.

First Appearance: The Black Terror #24 (September 1948). That was her only Golden Age appearance but it was a terrific story that saw the completion of her five year quest for vengeance.

Powers: Red Ann was in peak physical condition and excelled at unarmed combat. She was incredibly accurate with her handgun and was very skilled at infiltrating underworld dives and organizations and managed to thwart several of the Voice’s criminal operations over the years.

Comment: Red Ann’s gun apparently fired knockout pellets because when she at last caught up with the Voice she could not bring herself to kill him. Presumably this means that she had not killed any of his underlings in her long pursuit of the villain.

The Voice – who turned out to secretly be a former suitor of Ann’s named Trent – was bound for the electric chair for his crimes, so he wound up dead anyway. Trent had even paid for Ann and Bart’s train tickets for their honeymoon in Maine (Maine?) to pretend he was being a good loser for her affections.

Though this superheroine was a guest star in a Black Terror story, that hero made reference to the way Red Ann always managed to beat him to the crime scene when the Voice’s gang was involved and she would always leave the criminals bound and ready to be arrested.

That Black Terror story, The Revenge of Red Ann, did a great job of world-building for the costumed heroine and I’m always amazed that Nedor never used the character again, not even for prequel stories about her five year quest. 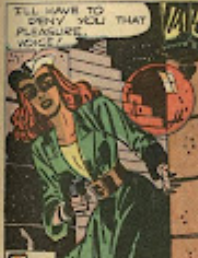 As of this writing, no one has revived Red Ann even though, like many Nedor characters, she is supposedly in the Public Domain now.

The conclusion of Red Ann’s costumed career with the capture and exposure of the Voice also brought her a new romantic interest – Daily Star reporter Richard Reagan, who became fascinated with Red Ann’s beauty and abilities.

WELL, THERE WE GO! I’VE ALSO ADDED RED ANN TO THE MAIN LIST OF NEDOR SUPERHEROES AND SUPERHEROINES – CLICK HERE.