A VOYAGE TO THE WORLD IN THE CENTRE OF THE EARTH (1755): ANCIENT SCIENCE FICTION

A VOYAGE TO THE WORLD IN THE CENTRE OF THE EARTH (1755) – This intriguing work was published in London anonymously and no author has yet been decisively identified. The novel’s narrator – who remains as anonymous as the book’s author – parties away his inheritance and then ships out for Italy.

Exploring on Mount Vesuvius our hero accidentally falls into what we readers are eventually told is just one of many holes that lead to the interior of the Earth, where another world awaits. A miraculous landing on a haystack saves the narrator’s life but he finds himself unable to move because of the greater gravity of this interior world.

A friendly inhabitant of the inner Earth applies a chemical salve to our protagonist’s body, a salve which allows him to stand up and move about in the higher gravity. A second salve massaged into the narrator’s body renders him capable of understanding and conversing in the language of Inner Earth.

The inhabitants of this interior world dress in silk robes and live to be 200 years old or older. They possess limited telepathy. Precious gems litter the ground but those jewels are meaningless to the Inner Earthers. Their society is partially socialist but with families held sacrosanct and with paternal authority sovereign in each household until the children reach adulthood. 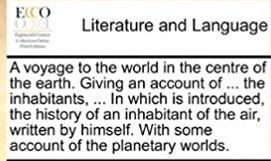 Periodically a King is elected for a lifetime term. Common-sense morality prevails, and ingratitude is especially frowned upon. All of the inhabitants are strict vegetarians, as are the animals so the humans and the beasts interact peacefully.

In addition to the usual above-ground animals, Inner Earth also boasts gigantic birds who are trained to provide air travel throughout the subterranean land. Our hero gets to meet the reigning King in the world capital called Oudentominos.

The King makes him welcome but stresses that visitors are usually encouraged to leave after a year. That custom was set in place when a still-extant colony of British men and women discovered Inner Earth nearly a hundred years earlier and have been causing frequent problems.

During our protagonist’s stay the cantankerous Brits once again come close to mutinying so the Inner Earthers attack them and subdue them. The men are castrated and both sexes of the Anglos are scattered around Inner Earth to prevent any more rebellions from fermenting.

As for life on other planets in our solar system:

The narrator encounters a frequently-incarnated spirit who remembers many lives lived on Earth and other worlds. Four thousand years earlier he was born on Jupiter as a prince. The inhabitants of Jupiter are enormous bird-like beings but with humanoid intelligence and emotions.

The Jovian Prince lusted after his Kingly father’s wife so he killed dear old dad and took his throne AND bride. A combination of guilt and paranoia eventually drove him to murder his stolen wife, too.

After his life on Jupiter ended he was reborn to Karmic punishment on a penal comet, where he was tortured for nearly two thousand years. One round of torture was so severe his tormentors accidentally killed him.

Next the spirit was reborn on Saturn, whose inhabitants are giant-sized bipedal humans. Saturn is incredibly cold and gloomy and the Saturnians are as grim as the old Norsemen of Earth. That existence ended when the spirit’s host body was sacrificed as an offering to a royal concubine.

The spirit was reborn on Earth after that, and came to be a servant for a wealthy woman who went through lovers at an incredible rate. When she tried to seduce the spirit he resisted her charms so she falsely accused him of robbery. He was tried, convicted and executed for this crime he did not commit.

Mars was the site of the spirit’s next rebirth. The Red Planet was like a Valhalla for military and political figures of the past, who lived an idyllic life. The Martian landscape was beautiful, music was the wind that filled the air and plenty of alcohol was on hand.

After partying one too many times on Mars with Alexander the Great the spirit’s Martian body died of alcohol poisoning. His final life was as a minister’s son in England during the time of Bloody Mary, and that life ended as a Martyr to the Church of England.

When his year-long visit is over the narrator is allowed to fly back to England by way of the giant birds of Inner Earth. The birds return after leaving him off and our protagonist is so sobered by the wonders he has seen and been told of that he spends the rest of his life as a hermit.

Despite the odd story structure and the anticlimactic ending this novel is very enjoyable. Its strange blend of ideas makes it stand out from many of the other countless “Hollow Earth” sci fi tales. +++

2 responses to “A VOYAGE TO THE WORLD IN THE CENTRE OF THE EARTH (1755): ANCIENT SCIENCE FICTION”