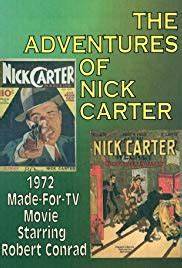 THE ADVENTURES OF NICK CARTER (1972) – Rest in peace, Robert Conrad. For decades, rugged sex symbol Robert Conrad embodied the old expression “women want him and men want to BE him.” My sister Debbie was a huge fan of Robert’s incredibly tight pants and frequently-bared chest.

A few years after Wild, Wild West went off the air, Conrad starred in this pilot film for a tv series based on old Dime Novel and Pulp hero Nick Carter.

Carter had been around since the 1880s but, presumably to avoid too much resemblance to Wild, Wild West, The Adventures of Nick Carter was set around 1920 instead. END_OF_DOCUMENT_TOKEN_TO_BE_REPLACED