Superhero movies continue to dominate at the box office, so Balladeer’s Blog figured it was time to look at another neglected comic book star: in this case Kalthar, from MLJ Publishing. FOR MY BIG LIST OF NEGLECTED MLJ SUPERHEROES CLICK HERE 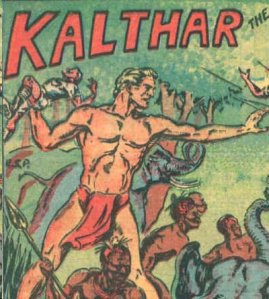 Secret Identity: None. Kalthar is his real name.

Origin: The father of the infant who would become known as Kalthar the Giant Man gave his life saving the Urgana African tribe from Muslim slave traders. To thank the dead hero for his role in keeping them free the Urgana people raised his infant son as one of their own and named the child Kalthar.

As he reached adulthood Kalthar formed a Tarzan-like bond with all the jungle animals around the Urganas’ Congo River locale. Kalthar so impressed Ta-Lo, the High Priest of the tribe, that the medicine man chose the adopted young man to receive the gift of the secret grains which Urgana medicine men discovered in the jungle. Those grains enabled Kalthar to grow to giant size and helped him battle evil-doers throughout Africa.

Reaction to my recent look at the forgotten superheroes from MLJ Publishing has been through the roof! We live in a superhero- crazed world right now as evidenced by movie releases in recent years. As a nice little encore here’s another MLJ superhero for you:

With the flood of superhero movies every summer in recent years Balladeer’s Blog will feature periodic examinations of the more obscure comic book companies. This time out it’s MLJ.

Origin: When his co-worker Ruth Ransom got kidnapped, Paul Patton felt he could fight crime AND enhance his journalism career by first donning a costume and thwarting criminals as the Fox and then getting a “scoop” on those adventures, complete with photos. And this was decades before Peter Parker made a living with news photos of his exploits as Spider-Man.

Powers: The Fox was at the peak of human condition. He had acrobatic skills greater than Olympic athletes and was a master of all forms of unarmed combat. His stealth skills were the equal of any burglar or ninja. The white eye-lenses on his mask permitted him to see in the dark.   END_OF_DOCUMENT_TOKEN_TO_BE_REPLACED