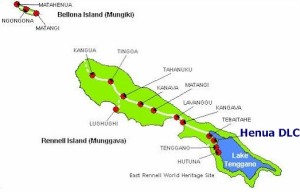 Balladeer’s Blog’s recent examination of the myths of Bellona Island and Rennell Island has been pretty popular. Here is an extended look at Mautikitiki, the Bel-Ren equivalent of Maui. FOR THE FULL LIST OF BEL-REN GODS CLICK HERE

MAUTIKITIKI – The most popular of the Bel-Ren divine entities classified as Kakai. Obviously this brother of Sina was the Bel-Ren counterpart to Maui (Hawaiian) and Ti’i Ti’i (Samoan). Like those figures Mautikitiki was famous for fishing up islands – in his case Rennell Island.

In Bel-Ren myths Bellona Island was the upper part of the shell of an enormous sea-snail, similar to Iroquois myths in which the world rests on the back of an enormous turtle. Bellona was considered the center of the entire world – an example of the type of ethnic chauvinism common to nearly ALL belief systems.

Rennell Island was beneath the waves and was the special hideaway of Mautikitiki’s father ‘Atanganga, from whose feces he was born. Resenting the way his father kept hiding from him, Mautikitiki created the first canoe, fished up the island and from then on Rennell has been on the surface of the ocean. END_OF_DOCUMENT_TOKEN_TO_BE_REPLACED