Balladeer’s Blog takes a look at the turning point story for Adam Warlock, a Marvel Comics character … and therefore probably destined to become a pop culture demi-god like almost every other Marvel figure thrown at the screen. (He was already an Easter Egg in their Cinematic Universe)

Marvel Comics characters, their film rights spread across multiple studios, have been at the center of seemingly countless movies in recent decades as well as plenty of television shows, both broadcast and cable. Flops like Howard the Duck and Ben Affleck’s Daredevil are cultural touchstones for cinematic failure. Marvel’s vampire slayer Blade, introduced in the 1970s, succeeded in three motion pictures AND a television series long before the Black Panther was adapted for the screen.

The X-Men, Spider-Man, the Fantastic Four, Hulk, Iron Man, Thor, Captain America and others have appeared in multiple films. Even less popular Marvel figures like the Guardians of the Galaxy and Ant-Man have been money-makers. Hell, even Groot, originally introduced as a rampaging monster in NINETEEN SIXTY has become nearly iconic despite having the most limited vocabulary this side of “Hulk will smash!”

(Yes, Groot – like Fin Fang Foom, Patsy Walker and the zombie Simon Garth – came even before the Fantastic Four and Spider-Man!).

All of which is my roundabout way of getting back to ADAM WARLOCK, another lesser-known Marvel character who will probably become a household name before you know it. Adam had the very FIRST encounter with GAMORA. He fought THANOS in multiple storylines dating back to the 1970s, sometimes alongside DRAX and THE AVENGERS.

Jim Starlin, a Marvel Comics artist AND writer, crafted Adam Warlock’s Magus storyline in the 70s. Like so many other Marvel creators Starlin blazed storytelling trails that are often erroneously credited to the overrated and overpraised Alan Moore. For one thing Alan Moore doesn’t even do artwork, he simply writes, unlike comics industry figures like Jim Starlin, Ethan Van Sciver and so many others.

At any rate, The Magus, as we’ll call this multi-part story, transformed Adam Warlock into the cosmic savior he became best known as. It also introduced Gamora, now famous from the Guardians of the Galaxy movies.

Title: WHO IS ADAM WARLOCK? / ENTER: THE MAGUS

Synopsis: This issue features a prologue titled Who Is Adam Warlock? The purpose of that prologue was to recap the fictional history of Adam Warlock up to this point, since this was Warlock’s first appearance in an attempted relaunch of his solo series. The recap is presented by Sphinxor, later revealed to be working for the Beyonders.

FANTASTIC FOUR #66-67 (Sept & Oct 1967) – Featuring Warlock’s first appearance, albeit under the name “Him.” The Fantastic 4’s mad scientist foes in the Beehive, later called the Enclave, created Him, an immensely powerful life-form, to serve them in their mad schemes. Him, emerging from his cocoon for the first of what will be many times, refuses to be their pawn. The FF survive the encounter with Him, who slaughters some of  the scientists and disappears.

THOR #165-166 (June & July 1969) – Him had been floating in space in his cocoon since leaving the Earth. The cocoon was found by an Earth space probe which brought the cocoon back to a research center on Earth. Him emerged from the cocoon, met and fell in “love” with Thor’s romantic partner Sif and abducted her. Thor furiously fought Him to rescue Sif and defeated Him, who again retreated into his cocoon and floated off into space.

MARVEL PREMIERE #1-2 (Apr & May 1972), WARLOCK #1-8 (Aug 1972 – October 1973), HULK #176-178 (Jun 1974 – Aug 1974) – This time Him’s cocoon was discovered floating in space by the godlike being called the High Evolutionary. This sometimes hero and sometimes villain added to our hero’s already massive powers by endowing him with a Soul Gem, later ret-conned as one of the Infinity Stones. This was its FIRST appearance.

Our hero renamed himself Adam Warlock and agreed to help the High Evolutionary. That being had created a Counter-Earth on the opposite side of the sun from the real Earth. He had wanted it to be populated by noble, vice-free humanoids but the High Evolutionary’s evil creation the Man-Beast caused the beings of Counter Earth to “fall” and reenact all the ugly events of the first Earth’s history.

The High Evolutionary planned to destroy Counter-Earth unless Adam could “redeem” its people and thus began one of the most hilariously silly Jesus parallels since Tommy, The Christmas Kid and Greaser’s Palace! Warlock gathered “disciples” about him on 1970s Counter-Earth and his efforts to lead humanity to a higher philosophy were opposed by the Man-Beast and his minions.

When this awkward “Godspell in SPAAAACE” was canceled with Warlock‘s 8th issue the tale had to be wrapped up in three issues of The Incredible Hulk. Keeping the unintentional laughs coming, Hulk (visiting Counter-Earth) became an uncomprehending Judas tricked into betraying Adam into the hands of the Man-Beast, posing as evil President Rex Carpenter ( A name which REALLY mixed the metaphors of this storyline. “Carpenter King” for the bad guy?)

Warlock had even gotten to do a Last Supper with his followers, and encouraged them to hold get-togethers like that in the future, even if he wasn’t around for some reason. (Stop it, dudes! Yer killin’ me!)

After a sham trial Adam was put to death on a super-scientific crucifix-shaped object, with his dying words being (I swear!) “High Evolutionary, why have you abandoned me?” (This absurd story should be Exhibit A regarding why many of us consider most comic book attempts at “depth” to be as enjoyably laughable as bad movies.)

Anyway, upon “dying” Warlock reverted to his cocoon form, just like Jesus (I’m kidding!). Soon he resurrected himself/ emerged yet again from his chrysalis, more powerful than ever and defeated the Man-Beast for good. He then bid farewell to his disciples and left Counter-Earth to pursue his future in deep space. 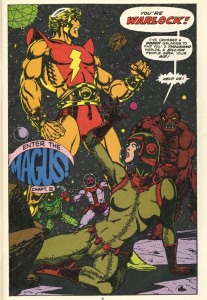 ENTER: THE MAGUS – With new readers now up to date on Adam Warlock’s past activities the second half of this issue started the story proper. In the months since he left Counter-Earth, Adam has apparently gained a reputation for helping assorted advanced civilizations, because a never-named humanoid woman in a space-suit finds him deep in thought on an uninhabited planet. She says she’s been searching for him and that countless worlds need his aid.

Before the woman can elaborate a trio of alien figures announcing themselves as Inquisitors arrive and kill the woman with their ray-guns. Warlock attacks them and as the battle plays out one of the alien Inquisitors is revealed to be a Roclite named B’rja. This would means he is of the same race as the Blood Brothers, super-powered servitors of the presumed-dead THANOS.

(Two years back I covered the Blood Brothers, the seeming death of Thanos plus the origin of the High Evolutionary when I examined Marvel’s Celestial Madonna Saga of 1973-1975 in the pages of The Avengers. Iron Man, the Thing and Drax fought the Blood Brothers.)

Adam drives off the trio of Inquisitors and then, while the dead woman’s soul still lingers, he uses his Soul Gem to reanimate her briefly so that she can tell him why she sought him out. The woman tells Warlock about the Magus, a self-proclaimed god who fell from space 5,000 years ago and who rules the Universal Church of Truth.

This Magus and his Church have conquered countless worlds, imposing a mad theocratic dictatorship everywhere they go. The Magus’ rule is absolute and he brings nothing but war, death, suffering and tyranny to each planet that falls to him. A cunning and Machiavellian woman called the Matriarch is the worldly ruler of the Church and oversees day to day affairs as well as the torture of “non-believers.”

Before Adam can question the undead woman further the Magus, apparently detecting Adam’s efforts, remotely attacks our hero. The Magus’ power seems far greater than Warlock’s but he is obviously reluctant to kill Adam. Presently, after some prodding from the Magus, Warlock realizes why.

The Magus resembles him a bit, but his skin is colored as green as the Soul Gem instead of being golden like Adam’s. Even the title “Magus” is a variation on Wise Man … Wizard … Magician … Warlock. Somehow this Magus IS Adam himself.

Warlock demands to know how this can be, but the Magus tauntingly refuses to tell him. As his other self cuts off the long-distance communication Adam vows to find him, free the suffering subject planets of his Universal Church of Truth, destroy that Church and then kill the Magus. Even if that means he himself will die as well.

As Adam Warlock flies off through space to begin his quest, this first chapter comes to a close. Rest assured the Magus/Adam Warlock mystery will be addressed as the story moves along. +++

I WILL EXAMINE THE NEXT CHAPTER SOON. KEEP CHECKING BACK FOR UPDATES.