Tag Archives: Legion of the Unliving

MANTIS 27: THE CAUSE OF THE VISION’S PROBLEMS AND THE SHOWDOWN WITH KANG’S LEGION 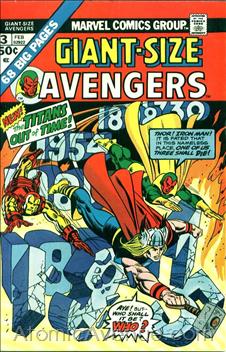 I will point out once again that the creative team at The Avengers did the best job of incorporating these short-lived “Giant Size” quarterlies into their ongoing storyline. And it certainly helped that they had a complex serial like the Celestial Madonna Saga running at the time that Marvel experimented with these Giant Size issues every 3 months.

We pick up where we left off: in the labyrinthine catacombs beneath the castle of Immortus, the ruler of the realm of Limbo. That realm exists outside of the time-stream itself, making it the ideal battleground for Kang the Conqueror’s latest attempt to possess the Avenger named Mantis, the Celestial Madonna, and through their offspring have control of all space and time.

Mantis and her fellow Avengers – Thor, Iron Man, Hawkeye and the Vision – had been battling Kang’s Legion of the Unliving. That group consisted of six supervillains that Kang plucked from the time-stream mere nanoseconds before their violent deaths. If they help him obtain Mantis and kill the rest of the Avengers he’ll let them live. If not, he’ll simply return them to meet their deaths.

Mantis, led by the Vision’s scream of agony, found him lying near death after his battle with a member of Kang’s Legion.

Synopsis: Mantis cradles the Vision’s dying body like she did with her lover the Swordsman several days earlier when he died at Kang’s hands. The Vision cannot move his android body and is delirious with pain.

He recounts to the now-weeping Mantis how he fought the Silver Surfer’s immensely powerful old foe the Ghost – one of Kang’s Legion of the Unliving. Even the Vision’s devastating tactic of plunging his intangible arm inside the Ghost’s torso and partially solidifying it could not defeat the villain.

That soldier of Kang then used the Vision’s own tactic against him, with the result that the Vision suffered so much damage from his foe’s arm that he is near death, while the Ghost simply vanished from the area.

With his tale done the delirious Vision hallucinates that his beloved Wanda, the Scarlet Witch is the woman with him as he dies, not Mantis. Mantis redeems herself a bit more by painfully letting the Vision believe the happy but false impression.

(Wanda is really back at Avengers Mansion, still being tutored by the sorceress Agatha Harkness.)

Soon Mantis’ grief is interrupted as she is attacked from behind by Midnight, the evil half-brother of Shang-Chi, Master of Kung Fu. Kang had plucked Midnight from his death hoping that Midnight’s martial arts skills would enable him to bring in Mantis alive to become Kang’s bride.

Mantis and Midnight do battle again, this time to the finish since their first battle was interrupted. The Vietnamese Avenger defeats the black-clad villain despite his use of weapons like Ninja Stars and nunchuku.

Again she wonders how her human weaknesses like the anger she just showed fighting Midnight qualify her to be the Celestial Madonna. Before she can pursue those thoughts she realizes the Vision’s dead body has been taken away by an unknown party.

Try though she may she cannot find the culprit in the confusing maze of tunnels and corridors. We readers get to see which member of the Legion of the Unliving absconded with the Vision’s corpse, however. END_OF_DOCUMENT_TOKEN_TO_BE_REPLACED

We rejoin our heroes right where we left off last time around. Kang the Conqueror launched his second attempt to take the Celestial Madonna – Mantis – so that their offspring can provide him with control over all time and space.

Kang double-crossed his newfound ally Immortus, another old foe of the Avengers from years earlier. Using Immortus’ technology Kang then plucked six supervillains out of the time-stream just a nano-second before their violent deaths. He brought them to Immortus’ realm of Limbo, which exists outside of the time-stream.

Those six villains formed Kang’s Legion of the Unliving. Their motive for serving him: if they don’t help him kill the Avengers then Kang will simply transport them back to the moment he plucked them from and they’ll die.

Do what he commands and he’ll let them live, with no repercussions to the time-stream because of the control of time and space that Kang will have thanks to his and Mantis’ offspring. 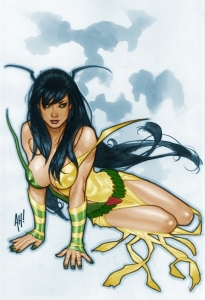 Kang imprisoned Immortus next to his future self Rama Tut II, then hit the Avengers with one of Immortus’ teleportation rays. That ray abducted our heroes and deposited them in scattered, random locations in the endless catacombs and tunnels beneath Immortus’ castle.

Kang announced himself to the Avengers over the broadcast system in typically melodramatic and operatic fashion:

KANG: Hear me, Avengers! You have defied my will for the final time! Here, lost and alone in the Labyrinth of Limbo, you will die at my direction and at the hands of the most relentless terrors you have ever faced!

So saying, Kang led his Legion of the Unliving into the catacombs to find Mantis and kill the other Avengers.

Synopsis: Kang, Baron Zemo, the Ghost (should be the Ghost Mariner), Midnight, the Original Android Version of the Human Torch and Wonder Man march swiftly through the dark maze of stone tunnels and corridors.

In the rear, the final member of the Legion of the Unliving moves more sluggishly and falls behind. END_OF_DOCUMENT_TOKEN_TO_BE_REPLACED 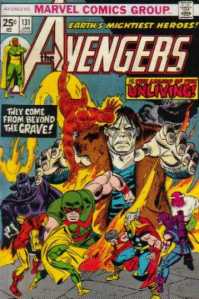 It’s back to Vietnam as we continue examining The Celestial Madonna Saga.

A QUIET HALF-HOUR IN SAIGON

Synopsis: We rejoin our heroes the day after their battle with the Titanic Three (plus Slasher) in the capital city of Vietnam where they were investigating Mantis’ past. Thor, Iron Man, Hawkeye, the Vision and Mantis still do not understand her coming role as the Celestial Madonna.

Nor do they understand exactly WHAT this Celestial Madonna will do, let alone who her mate will be or why their offspring will somehow control all time and space. The Scarlet Witch, meanwhile, is still back in New York at Avengers Mansion, being tutored by the sorceress Agatha Harkness.

There has been no response yet to the repeating radio summons to the Kree superhero Captain Marvel, who Iron Man hopes will be able to shed light on Mantis’ ties to the ancient sect of the Priests of Pama.

No one still alive in the criminal empire of Mantis’ late uncle has been able to provide useful information, either. The Madonna Star continues to shine above Avengers Mansion, drawing throngs from around the world and inspiring rumors that the star presages the end of the world.

Presently, as another night approaches Mantis gets to work off some frustration by thwarting an attempted mugging.

Even with all that going on, Hawkeye, who often wallows in even more self-pity than Peter Parker does, ponders his insecurities. He feels in a rut compared to all the mad action and changes swirling around most of his teammates.

CUT TO: The time-stream itself, where Kang the Conqueror remains locked in battle with his future self, Rama Tut II. Through time-travel technology that is superior even to Kang’s own the pair are plucked from Kang’s drifting time-sphere in which they were fighting.  END_OF_DOCUMENT_TOKEN_TO_BE_REPLACED