With Halloween just past and Veteran’s Day (Armistice Day) on the horizon, here’s a nice segueway – a novel featuring a witch and other supernatural figures during World War One. 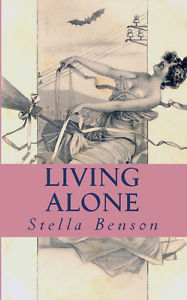 LIVING ALONE (1919) – Written by Stella Benson. This novel is like a World War One forerunner of Bedknobs and Broomsticks. In 1918, during what was then called The Great War, a London woman named Sarah Brown busies herself with War Savings Committee Work.

One day a witch invites her to move into a home called the House of Living Alone, which turns out to be a boardinghouse for practitioners of magic as well as assorted supernatural figures like faeries, imps, etc. Sarah accepts the invitation, taking her dog David Blessing with her.

This house is located on Mitten Island in the Thames River. Sarah becomes involved in the adventures of Peony, who is plagued by an Imp wanting to be born. She also meets Richard Higgins, a practicing warlock who runs – not a dairy farm – but a Faerie Farm, which is supervised by a dragon.

At one point a German bombing raid strikes a cemetery, waking up all of the dead. They rise from their graves, convinced that it is the Final Judgment, until Sarah and her new friends set things right.

Whimsically enough, circumstances later lead the witch who runs the House of Living Alone into mounting her flying broomstick and having a magical dogfight over England with a German witch. END_OF_DOCUMENT_TOKEN_TO_BE_REPLACED

Balladeer’s Blog celebrates Halloween all month long. For today here’s a look at an 1899 mummy tale.

PHAROS THE EGYPTIAN (1899) – Written by Guy Boothby, who was better known for his Doctor Nikola stories about an evil genius in the mold of Dr Mabuse and Fu Manchu.

Cyril Forrester, a successful British artist, is approached by an enigmatic and sinister-seeming old Egyptian named Pharos. This figure tells Cyril that a mummy he (Cyril) inherited from his Egyptologist father is the dead body of Pharos’ ancestor from over 3,000 years ago. 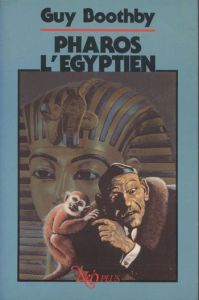 That ancestor was Ptahmes, whom we’re told served as a magician for the Pharaoh Ramses during the mythical Exodus. Pharos is angry over the desecration of his ancestor’s remains so Forrester obligingly returns the mummy to the old man.

And so begins a danger-filled supernatural adventure to return the mummy of Ptahmes to his tomb. Cyril is suckered along into following Pharos because he is attracted to – or as we’re supposed to pretend in fiction, he is “in love with” Valerie, a beautiful Hungarian violinist who is in thrall to the old Egyptian. END_OF_DOCUMENT_TOKEN_TO_BE_REPLACED

THE GALLOWSMITH (1918) – A traveling hangman really loves his work and has executed countless figures with no care regarding their guilt or innocence. If the court condemned them, he does his job.

An evil gunslinger called the Lone-Hand Kid has been condemned to death for a killing he didn’t actually commit. He berates the Gallowsmith so thoroughly while being hanged that our title character screws up, killing the Kid slowly and painfully instead of with one clean, neck-breaking drop.

As he dies the Kid curses the hangman, bringing on a ghastly finale.   END_OF_DOCUMENT_TOKEN_TO_BE_REPLACED

Halloween Month continues as Balladeer’s Blog takes a look at another tale of Gothic Horror which, like The Lost Stradivarius, centers around a violin player.

THE ENSOULED VIOLIN (1880) Written by Helena Blavatsky, aka Madame Blavatsky, famous for the Theosophy Movement and its premier work Isis Unveiled. Later she wrote The Secret Doctrine, another milestone theosophical opus.

This tale of Gothic Horror is set in the 1820s. The main character is a young violin virtuoso named Franz Stenio from Styria in Austria. Though studying the occult arts and alchemy while away at college his central passion had remained music.

Franz’s skill was extraordinary but eventually his widowed mother ran short of money, ending his studies. He left university and moved back home. Franz devoted his every waking moment to his violin and he refused even to go to church with his mother when she begged him.

The youth’s occult studies had filled him with contempt for Christianity and he preferred to think of himself as a pagan. Franz’s mother worried herself sick over the potential fate of her son’s soul and eventually she put such a strain on herself that she died. Some dark whispers hinted that her son had killed her. END_OF_DOCUMENT_TOKEN_TO_BE_REPLACED

JOHN SILENCE, PHYSICIAN EXTRAORDINARY (1908) – A selection of short stories about Blackwood’s fictional neurologist Doctor Silence and his encounters with the supernatural.

THE PSYCHICAL INVASION – A professional writer who specializes in humorous stories becomes a patient of Doctor Silence when he suddenly finds himself unable to write anything except grotesque horror tales. Silence discovers that on an occasion when the author’s psychic defenses were neutralized during a hashish jag the spirit of a 19th Century sorceress possessed him. The vile entity ended its life being hanged at Newgate. Doctor Silence must do psychic battle with the spirit to save his patient. END_OF_DOCUMENT_TOKEN_TO_BE_REPLACED

ALL HALLOWS (1926) – Written by Walter de la Mare. In recent decades Walter de la Mare’s horror stories have begun to get as much attention as his poetry. This particular tale is about a haunted cathedral but there is also a blatant subtext.

Our narrator has walked for several miles to reach remote All Hallows Cathedral. The once-prominent place has fallen into disrepair and has become so rarely used for religious services that it has become more of a curious tourist attraction than “holy” site.

Appropriately for a horror story our protagonist has arrived as the sun is going down. The odd, perhaps half-crazed Verger (Anglican Church Caretaker)  impatiently  leads the new arrival on a tour of the degenerating interior. Almost like a Halloween Funhouse host the Verger emphasizes the creepy lore about All Hallows.

Nightfall is well along by the time he tells the narrator about the temporary disappearance of the previous chief clergyman, who was later found in a dark corner. The Holy Man was weeping and crazed and never recovered his sanity.     END_OF_DOCUMENT_TOKEN_TO_BE_REPLACED

I always commit the literary blasphemy of saying that I don’t consider Victor Hugo’s The Hunchback of Notre Dame to be very much of a horror story. I will forever maintain that Hugo’s overlooked novel The Man Who Laughs features all the virtues of Quasimodo’s tale AND presents them all in a superior fashion.

In addition The Man Who Laughs contains many more elements that lend themselves to pure horror than does The Hunchback of Notre Dame. In the past I’ve examined elements of the film adaptations of The Man Who Laughs (including the fact that the physical appearance of Batman’s foe the Joker was inspired by Conrad Veidt’s 1928 portrayal of the title figure.)

Here’s a breakdown of why I prefer TMWL, with Hugo’s tragic monster Gwynplaine to THOND, with his tragic hunchback Quasimodo:

TIME PERIOD: The Man Who Laughs has the action set mostly in England in 1705. For Gothic Horror I prefer that time period to the late 1400s, when The Hunchback of Notre Dame takes place.

ORIGIN OF THE TITLE CHARACTER: Quasimodo the hunchback was simply born in a deformed state.

Gwynplaine on the other hand, was born looking normal, but was stolen away and sold by villains to the Comprachicos, evil anatomists who distorted the bodies of children in very painful ways. END_OF_DOCUMENT_TOKEN_TO_BE_REPLACED 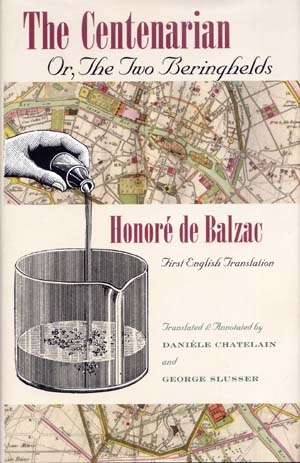 THE CENTENARIAN (1822) – Written by THE Honore de Balzac. Thirty-one days of Halloween continue here at Balladeer’s Blog! The Centenarian or The Two Beringhelds was one of the “quickie” novels that Balzac wrote in his early career, this one under the pseudonym Horace de Saint-Aubin.

Balzac himself looked down on The Centenarian and other early works that he churned out for quick money like the Pulp writers of a century later. Still, this work has value, just like the early Pulp stories from writers like Tennessee Williams, Dashiell Hammett and others. Plus I’m a Napoleon geek so I love immersing myself in the time period in which the novel is set.

The title character is really Count Maxime Beringheld Sculdans. The Centenarian was born in 1470 and led an adventurous life, supposedly even serving as a ship’s doctor when Columbus visited the New World. During his wanderings across the globe Count Maxime studied all the medicine and related sciences that he could.

Under the Rosicrucians the Centenarian learned various secrets of alchemy, including universal healing powers and immortality. Those last two secrets often worked hand in hand: Maxime would use his powers to mystically withdraw the illness or injury out of a sufferer but his “fee” was the draining of the life essence of another person in return.

The Centenarian leeches out the vitality of his victims but NOT by sucking out blood like a vampire. He drains their life force via alchemical means with his “medical” equipment. By the time of the French Revolution and the Napoleonic Wars, Count Maxime has grown a bit weary of his eternal life in typical Gothic style.

In recent centuries our title character has devoted himself to secretly watching over his family line, mysteriously saving their lives or killing off their enemies at crucial periods. The Centenarian has most recently intervened in Spain during the Wars of the French Revolution, saving the life of his descendant General Tullius Beringheld.

Intrigued, Tullius seeks out information on his enigmatic savior and eventually learns the Centenarian’s true identity and about his supernatural nature. By this point (the 1790s) Maxime’s body is misshapen. His arms are emaciated but his torso and legs are thick and muscular.

He is unusually tall but the skin on his head is so thin that his  scalp and facial features resemble a living skull. He smells of the grave but his powers of healing make others treat him with fear and respect despite the awful fee he demands.

The Centenarian’s additional powers include immunity to hanging and other forms of mortal injury. He has superhuman strength and his fiery eyes can induce fear, paralysis or death. He can read minds and teleport as well.   END_OF_DOCUMENT_TOKEN_TO_BE_REPLACED

Halloween Month rolls blithely along as Balladeer’s Blog presents another look at a neglected work of horror fiction.

THE DEVIL OF PEI-LING (1927) – This minor masterpiece was penned by the Bard of the Bowery himself, Herbert Asbury! New York Detective Inspector Conroy tries to stop a reign of terror which is in actuality being inflicted on the world by supernatural forces from beyond the grave and from just north of Hell.

The Inspector was first drawn into the affair by the novel’s narrator, a physician friend of Conroy’s a la Doctor Watson to Sherlock Holmes. The doctor treats a comatose woman following a car accident and notices that she has deep red stigmata on her hands and feet. These stigmata don’t stop at an imitation of Christ’s wounds and begin to sprout nails as well.

The horrors just keep coming from there, as a “living” crimson rope often appears out of nowhere to hang a series of law enforcement figures and jurors who sentenced a murderous magician named Paul Silvio to death by hanging.

As Conroy and his medical friend probe deeper they learn that after Silvio was hanged, his corpse animated itself long enough to threaten vengeance on everyone involved in his execution. Soon after the comatose stigmatic woman appears at the hospital other horrors abound.

Gigantic toads the size of small dogs show up, bloody human sacrifices take place and a bronze idol of a demonic being called Pei-Ling periodically comes to life to murder people. END_OF_DOCUMENT_TOKEN_TO_BE_REPLACED 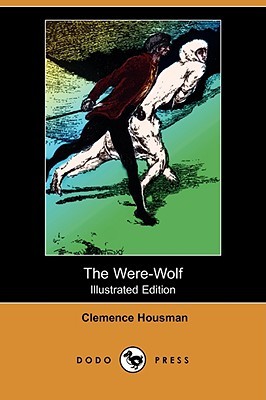 THE WEREWOLF (1896) – By Clemence Annie Housman. Halloween month continues at Balladeer’s Blog! This neglected story features a female author writing about a FEMALE WEREWOLF so that makes it a bit special right there.

The Werewolf is set in 1890s Denmark. Amidst werewolf attacks plaguing the countryside a Danish family finds itself being charmed by a sultry, seductive woman who calls herself White Fell. The woman travels alone by night so is obviously the werewolf at large. Unfortunately her potent beauty allays suspicion and even pits brothers Sweyn and Christian against each other.   END_OF_DOCUMENT_TOKEN_TO_BE_REPLACED