When it comes to gods and/or demigods who slay monsters Hercules, Thor and Gilgamesh get the bulk of the attention. Vishnu and Shiva’s roles slaying monsters in Hindu myths are well-known, too. Balladeer’s Blog as usual will show some love for those figures who get neglected simply because their pantheons are not as familiar to most of the world.

Chief Weapon: Spears made of lightning.

Rogues Gallery: This storm god destroyed an enormous porcupine with tree-sized quills, a giant bird with feathers made of wampum, a worm large enough to engulf an entire village, cannibalistic wizards plus a gigantic horned serpent and its army of equally large serpents.

END_OF_DOCUMENT_TOKEN_TO_BE_REPLACED 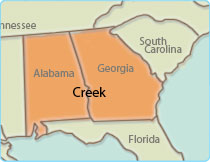 Balladeer’s Blog presents its latest examination of a neglected pantheon of deities. In the Americas alone I have previously written about gods and goddesses of the Navajo, Inuit, Hawaiians, Choctaw, Iroquois and Aztecs.

Those familiar with the Creek people are aware of how many different sub-classifications there are, so I will remind readers that this article deals only with the deities of the Muscogee Creek. In the future I will eventually do examinations of the gods of the Tuckabatchee, Yuchi, Tuskegee and others generally regarded as Creek.

9. NEREHVURESSE – The Muscogee Creek moon goddess. She was the wife of the sun god and, as with the moon goddess of the Choctaw people, it was said that she spent moonless nights having sexual relations with her husband. The differing phases of the moon were explained as Nerehvuresse covering her face in varying degrees of embarrassment over END_OF_DOCUMENT_TOKEN_TO_BE_REPLACED