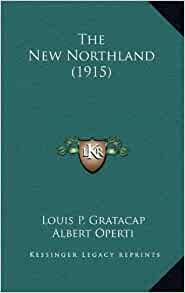 THE NEW NORTHLAND (1915) – Written by Louis Pope Gratacap. The main character is explorer Alfred Erickson, who recruited a few associates of varied backgrounds to join him in a search to prove the existence of an isolated warm weather land mass in the far north.

They have a ship take them to Point Barrow, then proceed on a launch from there. Eventually they reach a northern polar sea and upon crossing it, find the geographical pocket they theorized about. Mountain ranges shield the area from arctic winds and they will soon discover a more important factor in warming the region – which they name Krocker Land.

Erickson and company clash with a wild boar and a huge animal that is part crocodile and part python. They survive the encounter but grow wary about what may lie ahead.

Proceeding further, the explorers come across coins and other signs of an intelligent civilization. Soon, they catch sight of a race of very short people part Inuit and part Semitic. The three feet tall people are traveling by floating through the air on lighter than air balloon devices worn on their shoulders.

The Krocker Land inhabitants speak a form of ancient Hebrew known to Erickson’s erudite colleagues. Eventually, our explorers learn that the dwarfish people keep full-grown Inuits as slaves. Their religion centers around pine tree and serpent worship, with the area’s Crocodilo-Python species in the serpent role.

The outsiders are guided to geographical features with colorful names like the Valley of Rasselas, the Pool of Oblation, etc. They also meet a northerner named Ziliah and her father.

In the capital city of the Northlanders – named Radiumopolis – the explorers see that the people are very scientifically advanced due to the ample supply of radium deposits in the area. Large deposits in the Crater of Everlasting Light provide a radium “sun” of sorts, providing light and warmth to the Northland.

The diminutive people use radium to power lethal tubular weapons which shoot deadly rays. They also use the substance to change base elements into gold, making them a wealthy nation should they ever start engaging in trade with the outside world.

Up until now, the Northlanders have been ruled by a High Council, but, in one of the most groan-inducing tropes of Lost Civilization tales Erickson’s colleague Professor Bjornsen matches a prophecy about an outsider who would one day become their king.

Bjornsen is happily installed on the throne, Goritz dies and Erickson escapes when it looks like he will be prevented from returning to the outside world.

The New Northland is an okay read but nothing spectacular. If you’re a Lost Civilization completist be sure to check it out. Otherwise, you’re not missing much.