Previously, Balladeer’s Blog examined non-Biblical Samson myths depicting the figure as a sun god. Here in this second installment, I will look at some of the traditions regarding Samson in Islamic literature. For the first post in this series click HERE. 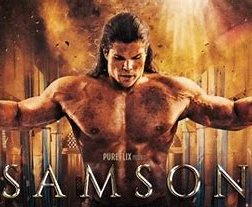 SAMSON IN ISLAM – Right at the start, I’ll make it clear that there is no specific reference to Samson in the Koran. Period. In some of the other scholarly writings by Muslim authorities of the distant past they included Samson aka Shamsun by speculating that he was among the many unnamed prophets of their faith.

However, some of those sources simply list Samson as one of the Judges in the Children of Israel chapters and tend to keep him in the same time period as Biblical tales of the long-haired strong man. Other Islamic sources specifically name Samson/ Shamsun and place the period of his life anywhere from the 1st Century B.C.E. to the time of the Christian Saint George. 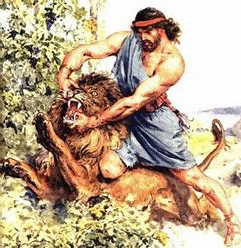 NOTE: Yes, that still puts Samson’s existence before Muhammad was even born, but the academic and religious debates about this are outside the material I am covering in this post.

For brevity’s sake I will avoid the in-depth arguments regarding exactly when Islam’s version of Samson supposedly lived. Suffice it to say that the Muslim literature in question states that Samson was born in a “Roman” city, placing his lifetime during the Roman occupation of the Middle East. This is much later than Biblical accounts of Samson.

Some versions of this “Muslim Samson” (for want of a better term) depict the figure as Jewish or Christian. This Samson battles designated enemies of his people and converts to the belief system that, centuries later would be called Islam, during his time of suffering and slavery after being blinded.

At last “realizing” that he has been following the wrong faith his entire life, Samson begs Allah to grant him the strength to bring down the palace of his enemies’ leaders (as opposed to the Bible’s Temple of Dagon). He, too, dies in the destruction but Allah brings him back to life, restores his eyesight and sends him forth to wage his own jihad for 1,000 months in order to atone for his lifetime of following false gods.

Other versions, however, depict Samson as being a proto-Muslim from early life onward. He battles oppressors who follow false gods, plundering their wealth as he defeats them rather than ever toil to support himself. At one point he slays 1,000 of his enemies with the jawbone of a camel, NOT an ass.

At last the day comes when Samson’s enemies realize they cannot defeat the man in open battle but must resort to treachery by enlisting his wife to betray him. Instead of three failed attempts on her part to bind Samson, we get only two here. In this version he does not bother lying to the woman betraying him about what can contain him, she gets her ideas from Samson’s enemies.

The first night they convince her to use ropes to tie Samson’s hands to his neck, rendering him unable to fight. She does so but when he awakens, he effortlessly breaks free of the ropes. The second night Samson’s enemies give her iron bonds to secure her sleeping husband’s hands to his neck but when he wakes up, he easily breaks free of the iron bonds, too.

From then on, the wife incessantly nags Samson regarding what his weakness might be, all the while pretending she is simply awestruck and curious about his superhuman strength. At length, Samson gives in and tells her that his long hair is the only substance able to bind him.

That night, the wife uses the sleeping Samson’s long hair to bind his hands to his neck, then calls to her husband’s enemies to come get him now that he is successfully bound. Samson wakes up but cannot break free of his hair-bonds so his enemies not only blind him but cut off his nose and his earlobes.

After that, the enslaved Samson is at one point brought before the king of his enemies at their palace, where Samson is mocked over his mutilation and his inability to free himself. The strong man prayed earnestly to Allah to grant him power over his jeering enemies, and Allah obliged, giving Samson enough strength to break free of his hair-bonds and bring down the palace on himself and 3,000 of his enemies.

Just like in the version in which Samson starts out following the “wrong” religion, this version in which the hero was a proto-Muslim from the start also has Allah revive Samson. Allah restores his eyesight, his nose and his earlobes, then sends him forth to wander on his 1,000-month jihad.

NOTE: In some of the Islamic literary sources, they claim that centuries later Muhammad cited – without specifically naming him – Samson’s 1,000-month service to Allah. He then stated that for a Muslim to worship just the one Night of Power during the Ramadan season was superior to the entire 1,000 month period that Samson strove on Allah’s behalf. (The 1,000-month period seems to just be a poetic way of saying “more than a lifetime” since 1,000 months would be over 83 years, a period longer than most people lived.)

Back to the story, after those more than 83 more years of striving/ waging jihad, Samson – who by now has made the jawbone of a camel into a hilt for a mighty sword – walks upward to the heavens, alone among prophets by having no devotees following in his wake.

Further complicating the issue is the way in which some of the versions in which Samson is a proto-Muslim all along place his 1,000-month jihad during his early life, ending with his binding, mutilation and captivity. Those versions leave Samson dead among the ruins of the collapsed palace.