SAMSON AS A NON-BIBLICAL SUN GOD – Before getting into the Biblical and Talmudic Samson tales, let’s take a look at the tradition of Samson being an ancient sun deity. In this context his “seven locks/ braids of hair” were seven solar rays emanating from his head like in ancient artwork of other solar figures.

A few examples would be the idol of Helios with seven rays from his head, Apollo with the same seven rays and even Phaethon having his father the sun god wind the “seven rays like strings upon his hair.”

In this version of the Samson story, it becomes a seasonal myth in which the sun god’s wife Delilah (or just Lilah in some versions) is a winter goddess. She causes the loss of Samson’s strength by cutting his seven locks/ braids/ solar rays, symbolizing the weakening of the sun and the shortening of the days throughout fall and winter.

By springtime, the sun god’s hair has regrown, and his strength is being restored, so artwork would depict his seven locks/ braids/ solar rays as long once again.

This tradition places Samson in a zodiacal context like Herakles. Samson slaying the lion is set in Leo, the swarm of bees and honey that he later finds in the lion’s corpse correspond to the Beehive Cluster in Cancer, etc.

One of the most contentious aspects of this zodiacal interpretation of Samson comes in the association of Pisces with the foxes that Samson tied tail to tail with firebrands and let them loose among the crops of the Philistines to burn their harvest. Those who argue in support of this interpretation cite Pisces’ proximity to equinoxes and point out how equinoxes have been depicted in fiery terms.

Further refinements in these versions of the Samson myth change the 300 foxes to 300 wolves to tie in with the constellation Lupus the Wolf. A counterpoint to the substitution of wolves for foxes is that the fox tradition is older and ties in with Demeter festivals in which a fox would be set on fire to punish its kind for the way a fox supposedly once caused the burning of wheat fields. 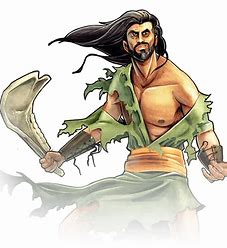 NOTE: In my view the child who set that fox on fire with straw and let it loose in the wheat fields is who should have been “punished” – NOT innocent foxes.

This zodiacal interpretation of Samson also presents the v-shape of the brightest stars in the Hyades Cluster as representing the jawbone of an ass that Samson wields as a weapon against the Philistines. Just as this tradition changed the foxes to wolves, it changes the ass to a bull because of the way the Hyades are in the constellation Taurus.

In the next installment I will examine another variation on Samson tales.