Balladeer’s Blog continues its examination of the stories of pulp heroine Jirel of Joiry, the Medieval French woman-warrior created by female author C.L. Moore in 1934. For the first story click HERE.

BLACK GOD’S SHADOW (1934) – This was Moore’s sequel to Jirel’s debut story Black God’s Kiss. We pick up an unknown amount of time after the conclusion of the previous tale. Jirel has been having recurring nightmares and visions ever since she killed Guillaume the Conqueror, the man she belatedly realized that she loved.

Of late the nightmares and visions have been intensifying to the point where our heroine is becoming convinced that Guillaume’s soul must be trapped in the hellish netherworld where she herself acquired the weapon she used to kill him. Castle Joiry was immediately evacuated by Guillaume’s troops in their panicked, superstitious reaction to the supernatural death of their leader. 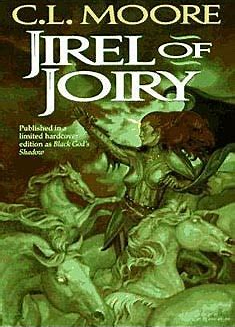 Order had since been restored in the castle but Jirel’s sleep has not been the same. As she lies tossing and turning, she ponders the various lovers she had taken over the years, none of whom took the hold over her heart and thoughts that Guillaume did.

Determined, she armors up, takes a sword and knife with her and sets out to somehow free Guillaume’s soul by daring to reenter the hellish domain that lies far beneath Castle Joiry.

When Jirel reenters the Black God’s realm she finds herself in a completely different location from her previous visit. It’s as if the hellish place rotates at its own pace, independent of the turning of the Earth.

Sadly, this sequel story is pretty uninspired compared to Black God’s Kiss. Much of the novelty is gone as we readers follow Jirel on her journey, once again encountering eerie, disturbing geographical features like sentient, suffering water and unholy entities that make her soul shiver.

There are some new wrinkles that Moore throws at us, like bizarre insect-like creatures and a living moon in the indescribable skies above, but the whole story feels like a modern day sequel to a brilliant film which was so successful that an uninspired follow-up was rushed out.

In the end, our heroine succeeds in freeing Guillame’s soul, letting it move on to wherever it is fated to go in the afterlife. The ending is bittersweet, since Moore wisely does not restore the Conqueror to life.

There is no sappy happy ending with Jirel and Guillaume getting to spend their lives together. That opportunity is gone forever, and the woman warrior is resigned to that as the story ends and she returns to the “real” world above.

Another thing this story suffers from is the lack of a supporting cast this time around. It’s just Jirel and the flickering, ever-morphing soul of Guillaume the entire time. The Black God doesn’t count since there is no intelligible interaction with that entity that is far beyond human comprehension.

Black God’s Shadow is essential for Jirel of Joiry completists, of course, but it’s a shame that a heroine with so few stories should have one of them wasted like this on a lesser version of her incredible debut tale. The nether-realm that was so disturbing and threatening during our initial visit is rendered much less impressive as Jirel manages to drive away its ruling deity multiple times.

A better Jirel of Joiry story awaits us next time.