Balladeer’s Blog concludes its examination of the stories of pulp heroine Jirel of Joiry, the Medieval French woman-warrior created by female author C.L. Moore in 1934. For the first story click HERE. 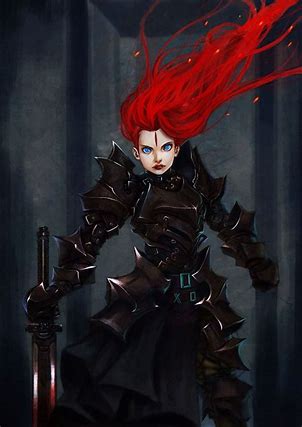 HELLSGARDE (1939) – Sadly, this is the last of C.L. Moore’s Jirel of Joiry adventures, but the character gets to go out on a high note. The handsome but treacherous Guy of Garlot ambushes twenty of Jirel’s soldiers and imprisons them in the dungeons of Castle Garlot.

Guy demands ransom, so Joiry meets with him to negotiate since Castle Garlot is impregnable to assault and sieges as it sits atop a high, steep mountain with underground springs supplying it with endless water. The only payment Guy will accept to free Jirel’s men unharmed is the treasure from the remote and damned castle of Hellsgarde.

Jirel knows that Guy is too cowardly to venture into that legendary site himself, so with a combination of contempt and resentment she sets out for Hellsgarde. She rides alone, since she considers it a suicidal undertaking and she won’t order any of her other soldiers to share the soul-searing risks of this mission. 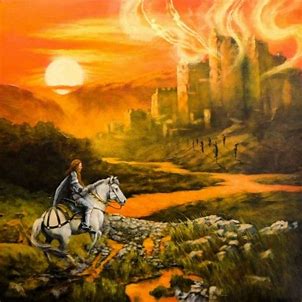 After a few days, our heroine arrives near Hellsgarde at sunset. She is unsure if this is just coincidence or if it means that the tales are true about the castle’s enchantment rendering it hidden until the sun is going down.

Her horse is reluctant to approach the vile landmark but Jirel nudges it along the winding roadway that leads to its entrance. That roadway is surrounded on both sides by quicksand and vast marshes which discouraged a massed charge against Hellsgarde even before it gained its infernal reputation.

Over two hundred years earlier, the castle’s master Andred and his army had fallen to forces determined to take the renowned treasure that Andred possesssed. All inhabitants of Hellsgarde had been put to death and Andred himself was subjected to horrible torture for several days.

Still he refused to breathe a word about the treasure’s location. Every inch of the castle had been searched over and over but its hidden riches were never found. Finally, Andred was dismembered and his remains were callously scattered throughout the swamps and quicksand. 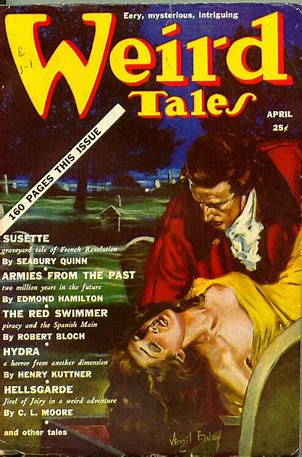 Ever since then, the castle went unclaimed and uninhabited. Stories about fevers, curses and the spirit of vile Andred clung to the place, discouraging exploration.

At last reaching the entrance of Hellsgarde, Jirel is disgusted to find a company of dead men propped up into standing positions supported by the spears which killed them. These fresh bodies indicate recent activity, but our woman warrior proceeds into the castle.

She encounters brutish soldiers that serve a handful of monstrously ugly men and women who claim to be descendants of Andred freshly returned to Hellsgarde to claim it. Their leader identifies himself as Alaric but denies knowing anything about any treasure.

The propped-up corpses “guarding” the castle’s entrance are Alaric’s idea of a “jest.” The food he and his colleagues dine on is so stench-ridden that Jirel cannot bring herself to eat much of it.

As the night goes on, it becomes clear that Jirel’s hosts are not entirely human and that they are also hunting for something within the eerie castle. What follows is a series of escalating horrors which rival anything our heroine has faced in any of her previous adventures.

At times Andred’s dismembered body parts emerge from the marshes to lustfully grope and kiss the revolted Jirel. Alaric and his cohorts even try using Andred’s obvious interest in the warrior woman to smoke out the location of his treasure. 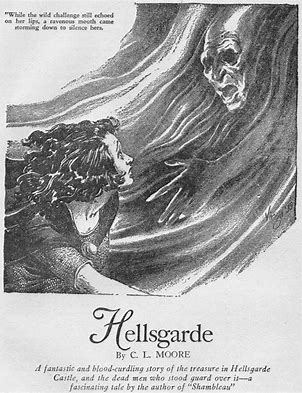 In the end, Jirel emerges victorious, overcoming all of the supernatural entities which surround her and acquiring Andred’s treasure to secure her men’s release from Castle Garlot.

C.L. Moore created a unique type of cryptid in this story: entities which feed on, get high on and clearly get off on, “undeath.” In other words, on the spirits of violent dead figures like Andred.

Given all the modern-day ghost hunting shows and movies you’d think someone would revive Moore’s idea about supernatural beings like Alaric and his underlings. Beings who feed/ inhale/ get intoxicated on ghosts and their essence of undeath.

Anyway, rest assured that Jirel arranges for Guy of Garlot to pay for having captured her twenty soldiers in the first place.

I really could have gone for at least one or two more Jirel stories. It’s a bit amazing that nobody has tried bringing her to the big screen, especially when Conan and Red Sonja were being pushed in the 1980s, or when Game of Thrones was big. Or even as successful as The Witcher currently is.