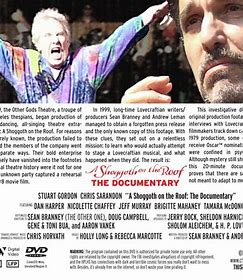 A SHOGGOTH ON THE ROOF (2000) – This comedic short film is a 19 1/2-minute mock documentary from the H.P. Lovecraft Historical Society. It was a very early effort to mimic the Found Footage approach of the previous year’s Blair Witch Project and centered around a fictional musical parody of Fiddler on the Roof using Shoggoth monsters plus other characters and situations from H.P. Lovecraft’s horror tales.

The tongue in cheek story began with found film footage of what appeared to be stage rehearsals for the nonexistent musical A Shoggoth on the Roof. A tape of that footage was received by members of the H.P. Lovecraft Historical Society, who then set out to investigate its bona fides while filming their own efforts in mock documentary style.

As the short movie rolls along, it becomes clear that something horrific happened to shut down the Other Gods Theater’s 1979 attempt at staging the musical before it could even debut. Finding the survivors of that ill-fated production proves difficult and getting them to talk proves even harder.

Stuart Gordon, the director who kicked off the modern era’s flood of blood and gore-soaked film adaptations of Lovecraft’s works through his 1985 horror movie Re-Animator, plays himself and is reasonable at comedy. Gordon pretends to become evasive and a bit fearful when our mockumentary’s investigators confront him with a 1979 playbill which seems to finger him as the director of that doomed staging.

Other participants slam doors in the faces of the film crew but a bribe in the form of Altoids gets one performer to open up just a bit about what happened. Elsewhere, the owners of the theater where the enigmatic “something” happened to derail A Shoggoth on the Roof make references to noises, screams and the slimy, stench-ridden aftermath of whatever horrific occurrence took place in their theater.

I’m reviewing this short film for what it is – a good-natured labor of love by people who for the most part are not comedy or show business professionals. (Outside of Stuart Gordon and Chris Sarandon) It made me smile at times with the way Lovecraft themes were being forced into songs from Fiddler on the Roof, but I’ll avoid ruining those jokes with spoilers since the song titles and a few lyrics here and there are really the only things that reach the comedic heights the filmmakers seem to be going for.

And yes, good old Herbert West, Re-Animator is one of the characters in the musical, which combines elements of several Lovecraft stories. Needless to say, the menace of Cthulhu hovers over the proceedings as a behind-the-scenes madman tries to use A Shoggoth on the Roof as a ritual to summon the Old One.

Since 2000, the fictional musical has been fully fleshed out and has taken on a life of its own over the years. At the H.P. Lovecraft Historical Society’s website you can find lyrics and performances of every song used to parody songs from Fiddler on the Roof.

Multiple colleges, universities and gamer groups have tried staging productions of A Shoggoth on the Roof, but legal issues and other problems have sabotaged most of them.

This mock documentary is fun but not always funny and if you’re not familiar with the works of H.P. Lovecraft you likely won’t appreciate what humor there is. Sort of like if someone watched Mel Brooks’ High Anxiety having never seen any Alfred Hitchcock films.