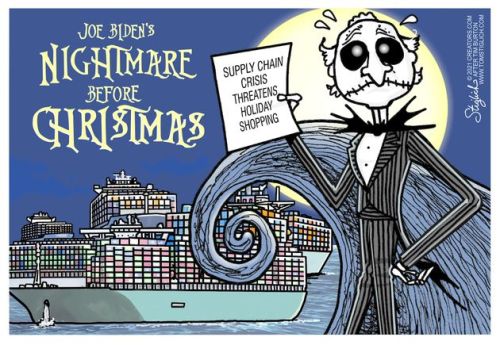 Joe Biden continues to demonstrate that he is easily the creepiest, most deranged figure to stay in the White House. His unhinged behavior at last week’s softball make-believe “Town Hall” was a source of ridicule around the world. The accused rapist’s disturbed whispering and repeated lies are just part of the reasons why his approval rating was down to 36% in last week’s Zogby poll.

“HE’S NOT ALL THERE”. Australia’s news media looks at Biden’s obvious mental deficiencies.

JEN PSAKI’S CALLOUSNESS TOWARD THE HARM BIDEN HAS DONE TO THE WORKING CLASS AND THE POOR IS SUMMED UP BY NOT THE BEE – “For rich elites like Jen – who have the institutional privilege they keep accusing others of – it is just a matter of inconvenience. If food prices keep skyrocketing (which they will) and essential items disappear off shelves completely (which they are), it’s not going to affect Jen.“

BIDEN STILL HAS OVER 360 AMERICAN HOSTAGES IN AFGHANISTAN. He also has more KIDS IN CAGES than either Obama or Trump did, but we all know Democrats never really cared about those kids. They just used them as political sticks. More HERE and HERE. And HERE.

THE DEMOCRATS AT THE WASHINGTON POST ADMIT THEY LIED – CROWD WAS NOT CHANTING “LET’S GO BRANDON” BUT RATHER “F*CK JOE BIDEN!”

HUNTER BIDEN STILL FUNNELING BRIBE MONEY INTO THE BIDEN CRIME FAMILY THROUGH HIS ONGOING SCAM OF “SELLING HIS ARTWORK.” Want to get in good with the regime? “Buy” some of Hunter’s “artwork.” (wink)

RASMUSSEN POLL: ONLY 28% BELIEVE JOE BIDEN IS UP TO THE DEMANDS OF HIS JOB.

BIDEN’S DUMBFOUNDED “WHAT AM I DOING HERE?” REMARK CAPTURED HIS WHOLE PERFORMANCE.

AND MORE ARTICLES OF IMPEACHMENT INTRODUCED AGAINST JOE BIDEN. Democrats made a joke out of the impeachment process so Biden deserves the now-routine filing of impeachment articles.

DEMOCRAT MEDIA OUTLETS CONTINUE TO COVER UP THE SCANDALS OF JOE BIDEN AND HIS UNDERBOSS HUNTER BIDEN. Republicans ineptly refused to keep pace with the Democrats in the Media Arms Race so it’s also their fault.

DEMOCRAT TULSI GABBARD CONTINUES TO FIGHT THE ESTABLISHMENT CROOKS IN BOTH PARTIES. She’s about the only Democrat in Congress fighting the good fight.