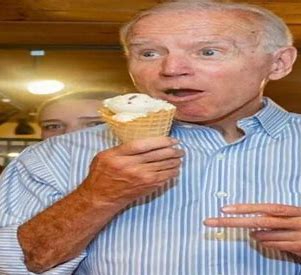 “LOOK AT ME”, Jill Biden was forced to say into the blank, uncomprehending face of her husband, the head of the Biden Regime. Jill was – like so many times before – trying to get the attention of her corrupt, inept and increasingly demented spouse Joe Biden and get him to stop making a public spectacle of himself. (Too late!)

Joe was blithering into a microphone without waiting for the nearby band to stop playing. Next, he foggily waved to no one in particular, cut his non sequitur remark short and waited for further guidance. Biden as Mister Magoo once again.

Joe’s approval rating dropped to 36% in the latest Zogby Poll in reaction to his string of failures, scandals and catastrophes as president. A Rasmussen Poll showed 58% felt that Joe Biden is not mentally or physically capable of being president. Yet this is the piece of garbage who was imposed on us.

Meanwhile, the working class and the poor continue to suffer the most under Biden’s policies as he has plunged the nation into a recession. To say nothing of the Supply Chain Crisis that Biden has caused.