ROLLER BLADE (1986) – They’re the Cosmic Order of the Roller Blade and they’re female Jedi Knights on roller skates. Well, sort of. Where does one begin when reviewing this film that is so beloved by all of us fans of bad movies? Let’s start with the setting and then tackle the characters as well as Roller Blade’s legendary director Donald G Jackson (R.I.P.).

This film is set in the future during The Second Dark Age, years after humanity’s “energy weapons” have unleashed an apocalypse which has left the world a ravaged mess of ruined cities yet immaculately maintained roads and highways. Go figure.

Amid the usual tableau of feral gangs and predatory mutants there stands a force for good dedicated to rebuilding the world: a religious order of warrior nuns called the Cosmic Order of the Roller Blade … Even though none of them wear actual roller blades, just regular roller skates.

“Skate or Die” is the ugly motto of the survivors in this kill or be killed future. That’s because the filmmakers absurdly pretend that traveling via roller skates or skateboards is the only way to move swiftly enough to have a chance of evading the dangerous gangs and mutants.

If you have any goods or supplies that you are taking with you the only way to transport them is in metal grocery carts that can roll along with you as you skate through the post-apocalyptic landscape. I’m not joking. This grocery cart nonsense is another idiotic element that the movie takes 100% seriously despite how inane it looks.

MOTHER SPEED (Katina Garner) – The Mother Superior of the Order of the Roller Blade. She is in a wheelchair yet still wears roller skates on her feet since such skates are part of the Order’s sacred garments. Mother Speed, like all the good guys in Roller Blade, speaks in grandiose faux-Shakespearean littered with “thees” and “thous” and “yea, verilies.” ESPECIALLY “yea, verilies.”

Making Mother Speed even more fun is the way she speaks with a weird accent that makes her sound like popular 1980s sex therapist Dr Ruth Westheimer.

Mother Speed’s subordinate Sisters are all hot-bodied babes who are trained to expertly wield switch-blades which make whooshing Martial Arts foley noises as they’re swung around. Some of the ladies wield hockey sticks against their foes when traveling in military formation. The Sisters are also trained to focus healing bio-energies through their switch-blades and can even resurrect the recently deceased with their powers.

Fully ordained Sisters wear pointy-headed red habits on their upper body and those habits each sport a black Maltese Cross, as if the Order is really a Red Baron branch of the KKK.

Novitiates wear blue outfits without the habits, which is why some of the roving gangs refer to the sisterhood as “blue birds.” (Oh, such world building!)

SISTER SHARON CROSS (Suzanne Solari) – One of the newest members of the Order of the Roller Blade. Like most of the Sisters she joined the Order to escape the nightmarish world of violence and sex-slavery which awaits women outside the Mission’s walls.

Motivated by precognitive nightmares about three members of the sisterhood being captured by gang members and dragged before the story’s main villain Doctor Saticoy, Sister Sharon seeks Mother Speed’s permission to lead a rescue party to save the trio. 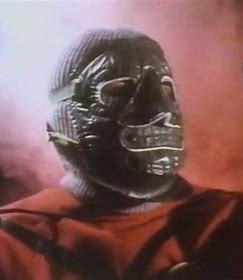 DOCTOR SATICOY (Robby Taylor) – A mutated mad scientist who hides his disfigured face behind a metal mask like the Humungus from The Road Warrior. One of his hands has mutated into a bald, Freddy Krueger-looking, ventriloquist’s dummy sized beast with an independent brain. It’s called Baby Saticoy and is so cheap it looks even lamer than Belial from the original Basket Case.

The mad doctor rules over the feral gangs by way of his savage cruelty and the fact that his Saticoy Brand batteries are the only available power source for the brigands’ portable devices. Dr Saticoy’s favorite method of killing is to dump victims into the vast lakes of battery acid which surround the region; toxic waste left over from the war of the energy weapons.

HUNTER/ SISTER FORTUNE (Shaun Michelle) – She’s a badass mercenary who is every bit as skilled on skates and with switch blades as any member of the Order of the Roller Blade. After completing her latest violent mission for Dr Saticoy against the few forces of “good” left in the world, she complains about how short-lasting are the batteries he provides.

Saticoy offers her a much greater fee than batteries for her next assignment. He wants her to infiltrate Mother Speed’s sisterhood so she can steal the Order’s greatest treasure. That treasure? A “power crystal” which was the last great invention of the scientists before the apocalyptic war of the energy weapons. That crystal can provide enough power to rebuild the world in the right hands, or destroy it in Dr Saticoy’s hands. 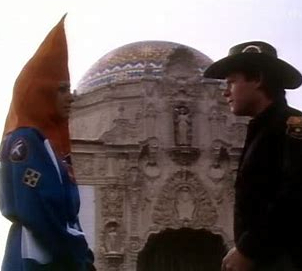 MARSHALL GOODMAN (Jeff Hutchinson) – Goodman (right) is the Roller Marshall, the commander of the Roller Police who skate around trying to maintain order with their guns and one-handed crossbows.

Like their allies in the sisterhood, Marshall Goodman and the Roller Police speak in faux Shakespearean patois … when they remember to. Just like how one of Goodman’s deputies is supposedly Jamaican, but only remembers to say “Mon” every now and then. 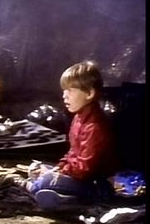 CHRIS GOODMAN (Christopher Douglas-Olen Ray) – Marshall Goodman’s 9 year old son, who gets kidnapped by Dr Saticoy’s minions to try to keep the Roller Police out of the mad doctor’s way. As his name would suggest, he is the son of B-Movie legend Fred Olen Ray and appeared in Fred’s films like Biohazard, Star Slammer, Hollywood Chainsaw Hookers and others. Chris went on to be a director and producer in his own right.

THE GANGS – Roller Blade features theme gangs, like in The Warriors. You’ll see gangs like the Spikers (all of whom have spiked Punk hairdos), the Samurai Devils (self explanatory) and the Wise Guys.

GIDEON, THE HOLY HOUND (Baher) – This dog in sacred garb saves a few good guys in the best “Lassie, go for help” style at one point in the story.

Hunter is taken in by the Order of the Roller Blade and is taught their philosophies and powers while working to overcome Mother Speed’s distrust of her.

The “ritual” in which she and other sisters get naked in a hot tub and “cleanse their sins” by rubbing their bodies against each other is always cited in reviews of Roller Blade. 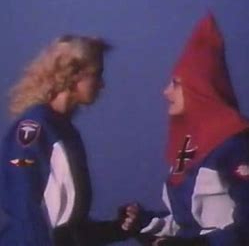 Sister Sharon is Hunter’s closest tutor and shepherds her all the way to the ceremony when Mother Speed names the newcomer Sister Fortune. It’s like when Palpatine dubs Anakin Skywalker “Darth … Vader” in Revenge of the Sith but not quite as silly and half-assed.

As readers could guess, Sister Fortune struggles with her conscience, going in a reverse-Anakin direction, but gives in to temptation and steals the Order’s power crystal anyway. Ultimately, however, when she learns the truth about Dr Saticoy’s nihilistic plans for the world’s future she turns against him and winds up paying with her life.

Sister Sharon and Marshall Goodman are left to recover his son and thwart Saticoy’s master plan. By this point in the story he has obtained the power crystal and uses it to power his rocket sled so he can fly it over the vast battery-acid moat that surrounds the ruins of Mecca Co, and thus reach the conglomerate’s remains. Or rather the incredibly cheap model passing as same.

Once there he plans to unleash all the energy weapons that the company had stockpiled in their factory during the war and thereby destroy the world. Or conquer it. He contradicts himself several times. You know bad movies.

They do more roller-skating before 9 AM than most people do all day!

Sister Sharon manages to kill Dr Saticoy before his rocket sled reaches the abandoned Mecca Co factory, and as the sled crashes the power crystal explodes, eradicating all of the weapons manufacturer’s entire stockpile.

(But wait, weren’t we told that if those weapons were all detonated at once it would be enough to destroy the entire planet? Don’t worry about it. You know how these movies go.)

Marshall Goodman consoles Sister Sharon over the loss of the power crystal but Sharon replies that she now realizes “the power lies within.” And with that meaningless platitude we cut back to the Order’s Mission, in which the late Sister Fortune is getting a Darth Vader style funeral pyre, stacked with all her sisterly paraphernalia.

WARNING: This synopsis makes Roller Blade sound far more coherent than it really is. It was only after multiple viewings that I was able to piece together all of the preceding details. Much of the dialogue is inane and just a few people provided voices for ALL of the characters, giving the dubbing a weird feel like this is a foreign film.

The martial arts choreography is as lame as could be and the special effects are anything but. The attempts at grand dialogue with all the “thees” and “thous” are every bit as laughable as they sound.

The absurd smiley faces that the Order of the Roller Blade use as their iconography are obviously intended to be humorous despite the director/ screenwriter’s claims that this movie and its sequels are meant to be taken seriously as “zen filmmaking.” But I admit it’s a nice touch how Dr Saticoy uses a “blasphemous” version of the smiley face to help show how evil he is.

And exactly what the hell is supposed to be going on in that scene when Mother Speed is cranking a pencil sharpener which manipulates a smiley face balloon (or something)?

Among the many blatant continuity errors which are littered throughout the movie is the way that – even though we are repeatedly told that luxuries like electrical utilities no longer exist – some nighttime shots accidentally reveal well-lit blocks of buildings off in the distance.

Plus there’s the way that several characters come and go from Dr Saticoy’s Acid Zone/ Great Chasm part of the City of Lost Angels back to the Roller Blade Mission multiple times in the amount of time it takes Marshall Goodman to complete a one-way journey there. It brings to mind the teleportation jokes about troop movements from Game of Thrones Season Eight.

There is plenty of gratuitous nudity in the film, with most of it coming from three particular members of the Order referred to as “the Bod Sisters” in the credits. There’s even a hilariously tasteless bit where Dr Saticoy’s mutated hand son/ brother nuzzles a bare breast and seems headed for “Dr Hill’s head in Reanimator” territory before being stopped. And call me crazy but Baby Saticoy sort of resembles Sid Haig.

Director Donald G Jackson got his start with the iconic B-Movie The Demon Lover in 1976, then churned out plenty of other half-assed and low budgeted films for decades, with highs like Hell Comes to Frogtown and lows like Rollergator.

As for Roller Blade, it is bad, bad, bad and is strictly for my fellow devotees of truly terrible flicks. The four sequels were nowhere near as “pure” and un-self-consciously bad as this first film in the series. However, Donald G Jackson’s labored and presumably tongue-in-cheek efforts to pass off the Roller Blade saga as serious art can’t help but endear it to me.

And, hey, at least the sequels feature women on ACTUAL rollerblades! So, to quote Mother Speed, “May you forever skate the paths of righteousness.” Take THAT, “Live long and prosper” and “May the Force be with you.”