THE BETSY (1978) – The popular 1970s television miniseries format proved to be perfect for adapting Harold Robbins’ novels since they were really just glorified soap operas, but for whatever reason this big-screen version of The Betsy attracted some very respected thespians for its cast. Name stars like Laurence Olivier, Robert Duvall, Katharine Ross, Jane Alexander and others pretty much slummed it in this flick, which was to the auto industry of Detroit as Dallas was to the Texas oilfields and Falcon Crest was to the California vineyards.

In this decades-spanning saga, Laurence Olivier stars as Loren Hardeman, the patriarch of a Detroit family which dominated the auto industry until recently. Loren is in semi-retirement and seems resigned to letting his grandson, Loren Hardeman III (Duvall), continue diversifying the family’s financial empire since their car business has been in decline.

Olivier’s Shakespearean talents weren’t really made to handle less grandiose dialects and accents, and his Midwestern American impersonation in The Betsy is almost as funny as his howlingly absurd Yiddish accents in The Boys From Brazil and The Jazz Singer. His oddball American accent as Douglas MacArthur in the film Inchon was bad, but not nearly as bad as the noises that come from his mouth in this movie.

Yes, in The Betsy, Olivier winds up sounding like a 19th Century carnival barker as rendered by Al Jolson, which makes that accent the centerpiece for most of the unintentional comedy in this would-be Godfather of the automobile business. For a sample of Laurence’s “Hurry, hurry, step right up” accent click HERE.

Moving along, Olivier’s Loren Hardeman would walk a million miles for one of the smiles from his beloved and adored wife Elizabeth, played by THE Whitney Blake, the housewife from Hazel. Katharine Ross portrays Sally, the wife of Loren Brian Hardeman II (Paul Rudd).

Loren II lives in the shadow of his larger than life father and can never seem to measure up to his expectations, etc. You know the trope. Because The Betsy is basically a soap opera at heart this drives Loren II into secret same-sex relationships and drives his unsatisfied wife Sally into bed with his father. I’m sure you can guess where this is going, and yes, Olivier’s character is the real father of Loren Hardeman III (Duvall’s character).

Speaking of Loren III it turns out that, while unaware of the big secret that Number One (as Olivier’s character is called) is really his father, not grandfather, he DOES blame Olivier for his “father’s” suicide. This adds some spiteful satisfaction to his ongoing transformation of his “grandfather’s” old empire into one of his own, ever further from the family’s auto industry roots. 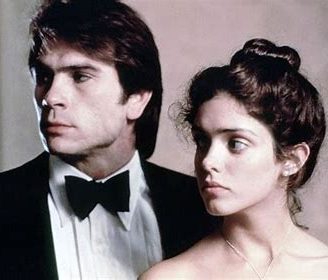 Enter Italian-American racecar driver Angelo Perino, played by Tommy Lee Jones, who wisely avoided any attempt at an accent. Angelo is the big ladies’ man of the movie and Jones isn’t as silly as you’d think in that role. He was pretty young, in decent shape, and had the benefit of the director using soft-focus cinematography on him during closeups to significantly obscure his pitted face. (Soft-focus would be used on prime time soap operas to obscure the facial wrinkles on starlets like Joan Collins, Linda Evans and others.)

At any rate, when Perino undergoes one car crash too many on the track, Olivier’s Hardeman convinces him to retire from racing to help him design a fuel-efficient and environmentally friendly new vehicle that Hardeman wants to call the Betsy in honor of his granddaughter. Loren III opposes this plan, since he is still trying to ease out Number One, thus setting him in conflict with Olivier and Tommy Lee Jones.

As Loren III, Robert Duvall isn’t quite a villain but the story treats him like one. He suffers almost as much abuse as he took in Breakout, albeit in this film the harm is to his ego and ambitions, not his body. Perino seduces Loren III’s mistress, played by Lesley-Anne Down, helps Loren I thwart his plans for the company and even oinks and boinks with Loren III’s daughter Betsy (Kathleen Beller) on her 21st birthday.

Jane Alexander is wasted in her role as Alicia, Loren III’s wife, who angrily sides with Angelo Perino in the corporate warfare just to spite her hubby Duvall for cheating on her with Lesley-Anne Down.

Another element in the mix is Tommy Lee Jones’s grandfather Angelo Luigi Perino (Titos Vandis), a Mafia boss who gave illegal aid to Laurence Olivier decades earlier. Edward Herrmann is along for the ride as the Hardeman empire’s Head of Finance, and Joseph Wiseman fades into the background as Jake Weinstein.

All the turmoil over the battle to launch the Betsy continues to bubble and boil throughout the movie’s runtime. None of it is very compelling, but maybe this production seemed fresher in 1978, before the flood of prime time soap operas hit television.

As it is, the big-name performers in The Betsy are the only things that make this tedious flick worth sitting through. Even the laughs from all the unintentional humor start to fade after awhile.

Does the Betsy automobile ever get mass-produced? You have to wait until a mid-credits scene for the answer, believe it or not.

FOR MY REVIEW OF THREE BIZARRELY WATCHABLE MOVIES CLICK HERE.