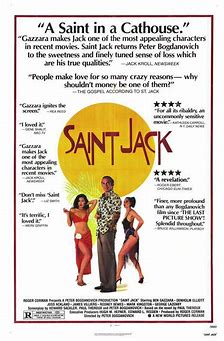 One of the most misleading movie posters in history.

SAINT JACK (1979) – Directed by Peter Bogdanovich and based on the novel by Paul Theroux, this movie is almost impossible to categorize. The Coen Brothers once said their film Barton Fink defied genre assignment, and if so then the same can be said for Saint Jack. It’s part gangster movie, part expat slice of life, part sex comedy and part failed political commentary. Kinda Hot, a book about the guerilla making of Saint Jack is loaded with even more sex and drama than the film itself.

Before I move on to story details, let me also point out how the creative forces behind the movie may well represent the most unlikely alliance imaginable. It’s produced by Roger Corman and directed by Peter Bogdanovich by way of his then-girlfriend Cybill Shepherd’s snagging of the novel’s film rights as part of a legal settlement with Playboy magazine. Oddest of all, Shepherd wanted the film rights ever since reading the Paul Theroux novel on the recommendation of … Orson Welles. And this was long before Welles appeared on Moonlighting with Cybill.

Ben Gazzara turns in what I consider to be his best performance as the title character Jack Flowers, a small-time pimp in Singapore during the early 1970s. Jack has the unflappable cool of Rick Blaine and a knack for supplying his customers whatever fits their kink, with ladyboys being among his mildest offerings.

As an outsider, Jack and his business venture are barely tolerated by the Asian gangs of the area, and he is constantly walking a fine line just to stay alive. Flowers longs to build up enough of a nest egg to return to America after a lifetime of squeezing out a hustler’s existence in the Far East. Over and over again, rival criminals and other circumstances derail his plans.

In a memorable scene from Saint Jack, Asian gangsters send a “get lost” message to Jack by trashing his place and dragging him off to have most of his body painfully marked with tattoos which read all manner of vile obscenities in the native language. The stoic Jack has another tattoo artist doctor the characters on his body to alter the worst obscenities, then establishes another brothel elsewhere.

And so it goes, as our protagonist perseveres through calamity after calamity. For a time Flowers even runs a whorehouse that has a sub rosa arrangement with the U.S. military to service soldiers on leave from Vietnam.

Denholm Elliott has a supporting role as William Leigh, a timid, honest accountant whom Jack shepherds along regarding the finer points of the kind of creative bookkeeping that criminal ventures require. Elliott goes from worry-wart to blase accomplice as the years roll along.

The venerable Joss Ackland and a few other stiff upper lip Brits add a bizarre touch of Somerset Maugham meets Charles Bukowski as Old Empire types spending their twilight years in Singapore. They are pathetically trapped in the past and forever dreaming of a pre-Suez time when it was still possible to delude themselves that the Empire was on top of the world.

In a truly oddball piece of casting, George Lazenby of all people plays a Democrat U.S. Senator who is into underage Asian boys. Naturally Jack can feed the Senator’s hungers, but CIA man Eddie Schuman (Bogdanovich himself) steps in.

Schuman wants Flowers to get pictorial evidence of the politician “in action” with his underage victim in order to obtain leverage to hold over the Senator and make him stop publicly criticizing the CIA’s uglier actions. NOTE: For overseas readers, let me mention that the 70s saw a rise in Congressional oversight of the grotesque CIA, so this would have been a VERY topical bit of business.

The sleazy CIA man offers the sleazy pimp enough money to finance his return to the U.S. if he’ll record the sleazy Senator’s indiscretion with his young victim … whom none of these characters give a damn about.

SPOILERS: After nine-tenths of a compellingly dark, brilliantly executed film, Saint Jack ambles to an unsatisfying ending. After getting the photographic evidence for the CIA man, Jack – in a very unconvincing attempt at a “moral” stand – changes his mind. He tells CIA Agent Schuman to go to hell, gives up his payment and gets rid of the incriminating photos of Lazenby’s Senator.

The way it’s all filmed we viewers are obviously supposed to sympathize with Jack’s actions, but exactly why we’re never told. Yes, the CIA deserves any screwing it gets but so does a Senator taking advantage of their position to victimize underage male prostitutes who live in poverty.

This ending is a classic example of a hollow gesture. Given the Senator’s proclivities, Schuman will likely get another chance to get his actions on film, so Flowers made no lasting impact on events. Even worse, without that big payday he is stuck in Singapore where he is already an outsider living on the sufferance of the indigenous crime bosses.

Moreover, Schuman presumably has all kinds of ways of screwing over the film’s protagonist to pay him back for the double-cross. So if Jack gets killed or winds up in a hellish prison for the rest of his life, or spends his old age begging on the Singapore streets he can comfort himself with the knowledge that he did it for … what, exactly? So that a Senator can go on sticking it in Asian boys?

Hell, if we’re in for such a downbeat ending anyway, why not have Jack go through with the setup of the Senator, but afterward overreach by trying to make an even bigger score for himself by photographing a few other high-placed clients and blackmailing them himself.

Maybe he could get arrested before being able to leave the country and the CIA, wanting to use Jack’s collection of blackmail photos for their own purposes, could decide to just eliminate Flowers by making it look like he committed suicide in his cell.

At any rate, Saint Jack is definitely a movie worth watching if you’re into gangster flicks, expat sagas and 1970s cinema. And if you aren’t, the book about the making of the film is riveting. Among other antics, the Singapore government was given a false script to read to fool them into thinking the filmmakers were doing a positive look at the country. The completed movie was banned in Singapore for years after it was obvious how the government had been deceived. +++