AGON: ATOMIC DRAGON, also called Phantom Monster Agon and Giant Phantom Monster Agon, is an overlooked miniseries from Japanese television. It was produced in 1964 but due to legal action over the monster’s similarity to Godzilla its creator’s old Toho contract was invoked to prevent the miniseries from being televised until 1968. This black & white miniseries ran just four half-hour episodes and aired on four consecutive nights, from January 2nd – 5th, 1968.

THE STORY: On a night when a typhoon is lashing Japan, a truck transporting uranium is blown off a cliffside road and into the sea. The uranium is devoured by a VERY Godzilla-looking monster called Agon after the supposed Jurassic Period dinosaur it resembles.

When an irritating reporter named Goro Sumoto aka “the Suppon” arrives to report on the police and the Atomic Energy Authorities scouring the beach for the lost uranium, Agon rises up from the sea in the exact same “bubbling waters first” technique favored by Godzilla. Goro photographs Agon, who vogues for a while, then submerges again. The reporter also meets Monta, the obligatory wise-ass little kid character so common to kaiju stories.

The atomic scientist Dr Ukyo, his female assistant Satsuki and Police Detective Yamato consult with Goro, and the good doctor theorizes that Agon has been in suspended animation since the Jurassic Period and that atomic bombs mutated him, making him hungry for the uranium which fell into the sea, waking him.

Eventually, Agon comes ashore to rampage around, looking for more uranium to chow down on and shooting atomic energy out of his mouth as needed. Nothing can stop the monster, and an entire town that lies in its path is evacuated. In his hunger, Agon eventually makes his way to a nuclear power plant which he causes to blow up, seemingly killing the monster but leaving onlookers unharmed. (?) Maybe they ducked and covered.

All that happened in the first two episodes. Parts Three and Four involve two Japanese drug dealers who hire Monta’s father, a professional scuba diver, to retrieve a suitcase of theirs which fell overboard. He finds the submerged suitcase, but also discovers the presumed dead Agon, still breathing but asleep right by the suitcase. He flees to the surface in fear.

The drug dealers reveal what is in the sunken suitcase and threaten to kill the diver’s son, little Monta, if he won’t go back under to retrieve their narcotics-laden case. To distract Agon, the gangsters steal some uranium to lure the monster away to a different area, enabling Monta’s father to obtain the case full -o- drugs. 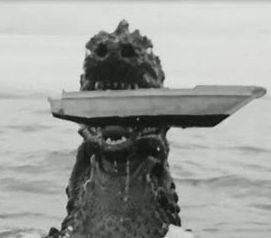 Things go awry and Agon winds up using his mouth to pick up the boat with the suitcase and Monta in it. Utterly absurdly, he just sits there, offshore, sleeping with the boat, drugs and little boy in his mouth. You’ll laugh your ass off at this! In the end the gangsters get blasted by Agon’s atomic breath, Monta is saved and Goro starts a relationship with Satsuki.

As for Agon himself, the good guys mix some uranium in with the suitcase full of drugs, getting him to eat the narcotics along with his food. In pain, the beast stumbles away and sinks beneath the waves, presumably to hide his shame at being the only kaiju monster to die from a drug overdose. (Well, if you don’t count those rumors about an elderly, washed-up Yongary.)

Agon was never seen again but the miniseries was eventually edited together into movie form decades later. It’s available on DVD these days. As long as you know going in that you’re getting nothing but a slightly more fearsome looking version of Godzilla you should have a good time laughing at the odd goings-on.

DRINKING GAME: Take a drink every time Goro brags that he never gives up once he gets his teeth into a story.