SAMURAI FILMS – THE SON OF THE BLACK MASS SERIES

Raizo Ichikawa as the red-haired Samurai Kyoshiro Nemuri, the Son of the Black Mass.

Balladeer’s Blog begins its examination of various Samurai films from Japan. In keeping with my blog’s overall theme I won’t be covering the uber-popular Samurai flicks like Yojimbo, The Seven Magnificent Samurai or the Musashi Miyamoto Trilogy. Regular readers who are familiar with my contempt for organized religion will not be at all surprised that I’ll be starting out with the Son of the Black Mass series of films starring Raizo Ichikawa, often called “the James Dean of Japan.”

In addition to the twelve Ichikawa movies I will also cover the two entries in the series made after Raizo’s untimely death from cancer. After that, to be a fully comprehensive look, I will also examine the original novels as well as the three Son of the Black Mass movies made in the 1950’s, even though they did not have the cinematic impact of the films starring Raizo Ichikawa.

The odd title of the movie series comes from the fact that the title character, former Samurai turned Ronin Kyoshiro Nemuri, is the child of a Japanese woman and the crazed Portugese missionary who raped her. The insane missionary was dabbling in Satanism and Nemuri was conceived during a Black Mass ritual, hence the series title. The deadly swordsman inherited his hated father’s red hair and when a heavy rain washed out the black dye Nemuri was disguising it with, his exposure as a half-breed led to his shunning and his fallen status.

Now flaunting his unusual hair color the cynical anti-hero wanders Japan of roughly the late 1780’s and early 1800’s, becoming increasingly hostile and longing for a glorious death in battle. The early films in the series were fairly straightforward with the biggest oddity being the twisted origin of Nemuri. As the films went on the stories got darker and more bizarre in ways reminiscent of David Lynch’s body of work. The horror elements increased and so did Nemuri’s hatred of all religions and all of mankind.

“You are getting very sleepy.” Nemuri prepares to deliver his Full Moon Death Strike.

Alternate titles for the film series include The Full Moon Killer, a reference to Nemuri’s fictional “Full Moon Death Strike”, a supernatural maneuver he pulls with his sword. The worst alternate title is, unfortunately, the one being used in the most recent DVD release: Sleepy Eyes of Death. It’s a reference to the brooding eyes of actor Raizo Ichikawa but it’s far too silly a title for a series of movies about such a badass character. I’m glad I purchased my copies long ago under the Son of the Black Mass title.

The Chinese Jade (1963) was the first of Ichikawa’s 12 film run with the character. The opening scene features our ruthless antihero hanging out in dangerous areas of Edo (Later to become Tokyo) and facing down six Ninjas hired to kill him. Nemuri warns his attackers that if they force him to draw his sword he will kill them all. Naturally they disregard this warning and pay the price.

Nemuri spends the night with his main lady of the moment, a pretty young singing instructor, and when he learns the bodies of his slain foemen from the previous night were carried off before sunrise he realizes they were sent by shrewd and efficient adversaries.

The plot of this opening Ichikawa movie is surprisingly formulaic compared to the moral and physical anarchy to come in this film series. Everything centers around a jade Buddha statue imported from Siam (later Thailand). A wealthy and aristocratic daimyo is after it, an outright criminal faction of the Yakuza is after it and a virtual army of Ninjas and other assassins have been hired to recover the item.

Other colorful figures Nemuri encounters in this violent quest for the jade Buddha: Chisa, a beautiful woman sent to seduce Nemuri into working for the daimyo and to spy on him, Chisa’s usual lover, who is an oddly humorous and swashbuckling Ninja and Chen Sun, a Chinese man living in Japan. Chen Sun is a master of Kung Fu and is working for the Yakuza gang. Needless to say the final showdown is between Chen Sun and Kyoshiro Nemuri and is fought on a stretch of beach.

The piece of jade artwork that is at the root of it all supposedly contains a document that would prove the daimyo faction is involved in smuggling, thus causing the Shogunate to destroy them. In reality it contains info pertaining to the beautiful Chisa and a fairly easy to spot plot twist. 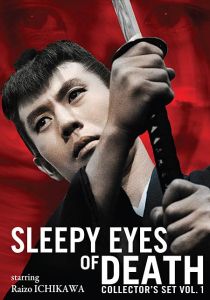 It’s the zany Don’t Mess With the Zohan 2: Sleepy Eyes of Death.

In the end Nemuri finds himself in possession of info that could gain him a fortune but he disdainfully tosses it into the sea. He hates the world so much he doesn’t want a life of wealth or high position – he just wants to die in battle. The only truly supernatural aspect of the movie is the way Nemuri’s sensitivity to people’s “auras” tells him that Chisa has had as traumatic a childhood as he did.

The Chinese Jade also contains some interesting subtext regarding the gray area where unethical business practices and outright criminality mingle. Overall, however, it’s much more mild than the dark and daring Son of the Black Mass movies that were to come.

***  I’ll be examining the rest of the movies soon!