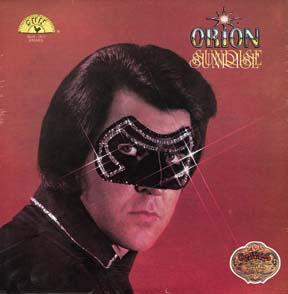 This blog post will dredge up the often-neglected Orion business from decades ago. It was a fun bit of nonsense that only the most far-gone Elvis Conspiracy Theorists take seriously. As always I consider conspiracy theories, put-ons, hoaxes and ARG’s to be modern variations of myth and folklore. 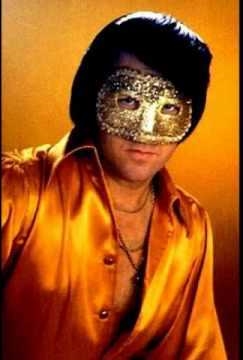 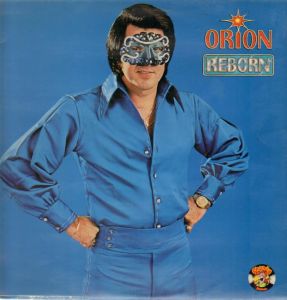 ITEM: A masked singer – who looks like a standard Elvis  impersonator except for the mask – appears and calls himself Orion. He begins releasing albums and performing in public. This Orion’s first album, tantalizingly titled Reborn, is released in 1978.

ITEM: At various public performances there are moments – conveniently captured on film (supposedly secretly and ALWAYS at a distance) – in which the Orion who was just seen singing on stage slips away, passing a similarly masked and “Elvis-like” figure who takes his place for post-concert autograph signings and fan-chats.

ITEM: This repeating set of circumstances ignites speculation that the masked Orion who sings on stage is really Elvis Presley, who faked his death like in the novel Orion. The Orion who appears in photos, signs autographs and chats with fans is speculated to be an accomplice who helps “Elvis” continue his career by letting Presley himself perform while the confederate deals with the stressful fan situations.

ITEM: Skeptical minds (Dare I say “suspicious minds?”)  probably wondered if the whole “Oh my God there’s TWO of them” moments were carefully choreographed precisely to fuel such speculation, to increase record and other sales for “Orion.” In other words, that the incidents capturing the two figures on film were set up “accidentally on purpose” to appeal to the Elvis Lives crowd by looking like a coverup was being exposed.

ITEM: The author of the novel Orion later released a book titled Is Elvis Alive? which was published alongside a cassette tape of an alleged interview with Presley recorded long after his death.

ITEM: Years later singer Jimmy Ellis admitted to being the singer calling himself Orion. On top of that, technical analysis of the cassette interview raised serious doubts about the voice on the tape.

ITEM: In the usual Leap of Faith nature of the conspiracy world many people still believe that the singing Orion was really Elvis Presley and Jimmy Ellis simply filled in for the album covers, autographs and chats with fans. Ellis’ shooting death (as a robbery victim) in 1998 provides predictable material for some of those faithful.

There you have it! A look at the way the mystique of wealth and fame can comingle with standard conspiracy theories and posthumous folklore. Human creativity takes many wonderful forms until truth, fiction, pretended truth and pretended fiction become nearly inseparable.