Superheroes dominate pop culture these days and Balladeer’s Blog’s readers always let me know about it when they feel I’ve gone too long without an article about them.

In honor of the shortest day of the year today here is a look at the shortest run of superheroes ever. Remember how Atlas/ Seaboard was publishing for less than a full year? Well Pelican Publishing’s superheroes came and went in ONE MONTH. 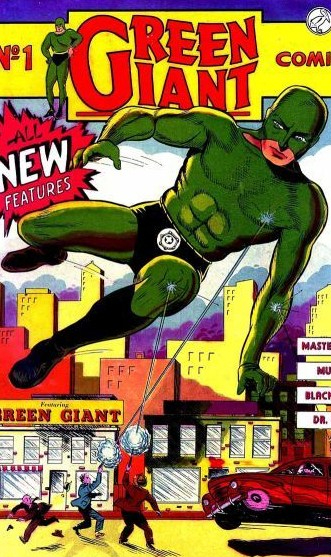 Secret Identity: Mr Brentwood, a stock broker. No first name was given.

First and Last Appearance: Green Giant Comics #1 (1940 – the month is not known)

Powers: The Green Giant wore a high-tech “gravity-defying” device in his belt, a device which enabled him to grow to hundreds of feet in size and to fly. He was also bullet-proof and possessed massive super-strength. 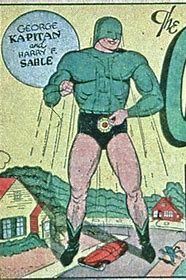 “WHEN I THINK ABOUT FIGHTING CRIME I TOUCH MYSELF.”

Comment: In his only adventure, Mr Brentwood was advised by his firm’s partner named John Preston (how did HE rate a first name) that criminals were dealing in counterfeit stocks.

Our hero donned his costume and corralled all the members of the crime ring, even swimming after a departing ship to capture the ringleader Sam “Smiley” Gleason. (Okay, Gleason was just rubbing it in to our poor hero by having a first name, last name AND a nickname.) 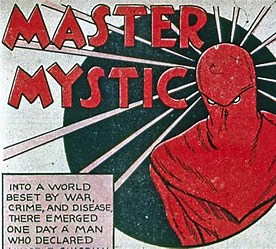 Origin: Master Mystic had developed “the powers of mind over matter” to their utmost.

Donning a red costume he declared himself the guardian of the world and battled the forces of evil from his “Tower at the top of the world.”

Powers: This hero was impervious to the elements, could fly via telekinesis, turn into vapor, project his voice around the world, conjure up materials from nothing, paralyze people with a command and shoot intensely powerful “liquidating rays” from his mind.

Comment: Our hero’s one and only villain was Rango, a European mad scientist who used a drug to turn himself into a giant to take over the world.

Sounds like Rango should have fought the Green Giant.

Secret Identity: None. His first name is not known but he really was Doctor Nerod.

Origin: Doctor Nerod was a scientist of unrivalled genius, so the United States government contracted him to create assorted weapons and other devices.

Powers: With his matchless brilliance, this hero could devise virtually anything he could imagine. His headquarters was in a remote mountain laboratory provided by the government.

Comment: Doctor Nerod was hilariously similar to a supervillain in his lone appearance. He created a deadly version of sleeping sickness with which he infested tsetse flies. The flies were unleashed on the soldiers of an enemy nation, putting them into a permanent slumber unless their country surrendered. Afterward the cure was administered. 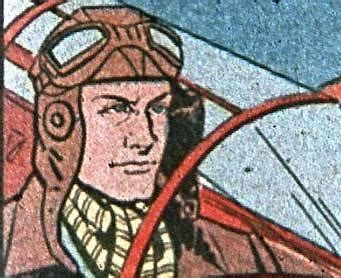 Origin: Under the code name Black Arrow, Rex Norton was a pilot and top secret operative for the U.S. government assigned to the most important cases.

Powers: Black Arrow was a superb pilot and had the combat skills of a commando. He was also proficient with handguns. A black arrow was painted on the side of his red plane.

Comment: In his only mission, Black Arrow investigated enemy agents who were preying on American ships in the Atlantic shipping lanes via their “missiles of doom.”

Origin: The Researcher (talk about a nom de guerre that’s guaranteed to strike fear into the hearts of your enemies) was a brilliant scientist and physical fitness nut who used his inventions and his fighting ability to fight foreign agents.

Powers: This hero was in peak physical condition and exceled at unarmed combat. He fought the forces of evil with his futuristic inventions like an x-ray flashlight and a psycho-ray which transmits pictures of its target’s thoughts on a telepathy screen.

22 responses to “SUPERHEROES FROM PELICAN PUBLISHING”