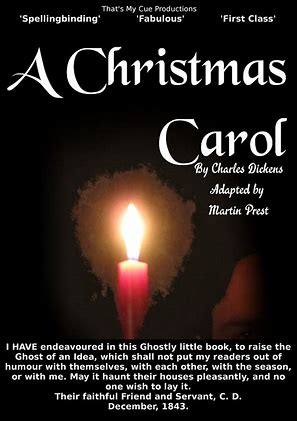 This video presentation runs just 57 minutes so obviously it is a heavily truncated version of A Christmas Carol.

Prest, like Patrick Stewart and others before him, acts out all the characters himself on stage. A succession of backdrops and some lighting adjustments are the only help his one-man show receives. Prest’s voicework isn’t as varied as some other performers but he makes up for a lot of that with his facial expressions.

I wanted to like this version of A Christmas Carol more than I did. Prest gives it his all and there is certainly nothing wrong with his performance, it just didn’t move me the way other one-man shows of the Carol have.

Martin adds a few comedic touches here and there that bring a smile but he is swimming upstream against the familiarity of the narrative and the memory of the actors who came before him in solo performances of the Dickens classic.

The main problem for me may well have been over-familiarity with the material. Martin Prest’s video presentation may work best for those people who don’t wallow in A Christmas Carol every year from the Friday after Thanksgiving up to Christmas Day.

The novelty of hearing Dickens’ actual words may be a fun revelation for people who only know the Carol from some of the adaptations or quickie cartoon versions.

At any rate, Prest is pretty watchable and I can’t cite any flaws or failures in his performance. By all means his video is well worth watching for casual viewers or my fellow Carol geeks. If it is the first time someone has seen an actor attempt a one-man show of this story it will likely be a wonderful treat for them.