DARK INTRUDER (1965) – This thoroughly enjoyable piece of Forgotten Television was a failed pilot for a series. Supposedly the network passed on it because they thought it was too scary and gruesome for tv viewers of the time. Instead they released this 59-minute black & white gem to theaters as the second title for double features.

The story is set in 1891 San Francisco with Leslie Nielsen himself starring as Brett Kingsford, an occult expert and investigator. If this had been picked up as a series the title was going to be The Black Cloak and apparently would have been a forerunner of The Norliss Tapes, Kolchak and Spectre. In my opinion the period setting would have given The Black Cloak the edge, though. 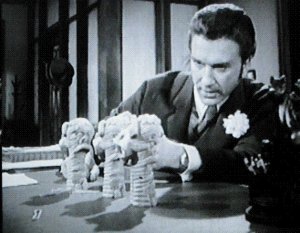 Brett Kingsford maintains a quasi-secret identity. On the surface he’s known in San Francisco as a bon vivant and ladies’ man and when the police want to consult him over something supernatural he dons various disguises to rendezvous with them. That way nobody in his usual social circles is made aware of his connections with the cops.

A taloned, humanoid creature is committing a series of slayings in Frisco and Kingsford is called in to investigate. Our hero’s sidekick is a midget named Nikola and is played by Charles Bolender. He also raises an intelligent Mandrake plant. Werner Klemperer of Hogan’s Heroes fame is along for the ride in a villainous role.

The story’s horror elements include a Jekyll/ Hyde figure on a killing spree, an occult object made of actual human flesh & bone, a skeleton in an open coffin and human sacrifices to match each of the seven spokes of a wheel. And of course, any horror tale set in 1891 San Francisco will automatically throw in a sinister Chinese mystic in old Chinatown for good measure.

There’s even a bone thrown to H.P. Lovecraft fans as events unfold!

Judi Meredith is as pretty as always but has virtually nothing to do in the story. However the telefilm features plenty of action, including a few physical tussles between Nielsen’s character and the monster. 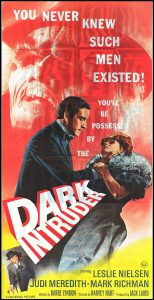 Dark Intruder features perfectly acceptable special effects for what was originally a television production. The story is not a classic but a tale like this is all about the hero and Nielsen as Kingsford was dashing and intriguing enough that he could have carried this series like he did his old Swamp Fox show. It’s a shame we never got to learn more about either this figure or Robert Culp’s character in Spectre.

Jack Laird’s usual levels of production quality are on display as well.

And no, Nielsen at no time says “I’m going to solve this series of murders. And stop calling me Shirley.” ++