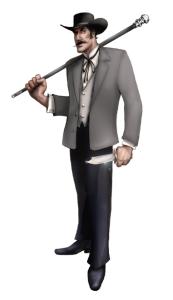 PART FORTY-SIX – Items of note in the May of 1911 issue of James Larkin Pearson’s version of The Fool-Killer:

*** The Fool Killer targeted the way so many corrupt millionaires were suddenly overcome with “medical ailments” when they were being investigated or after getting sentenced to prison time.

*** In another of the surreal satirical bits which Pearson was writing more frequently, this month he had the Fool Killer encounter a medical abomination called the Composite Man. The Fool Killer visited the Rockefeller Institute in New York (called the Rocky D Oilyfeller Institute in Pearson’s odd stylistic blend of Frank Baum and Walt Kelly with Bullwinkle & Rocky).

The reason for the visit? Our title character wanted to check in on the latest work on medical transplants. The doctors at the institute surgically removed the lone healthy body part on a variety of their most far-gone patients and sewed them all into a lone figure called the Composite Man and the Pieced-Up Man interchangeably.

The Composite Man had the head of a preacher, the chest of a drummer, the heart of a lawyer, the stomach and bowels of a farmer, the left arm of a blacksmith, the right arm of an editor, one leg of a dude and the other leg came from a tramp. The competing portions of the Composite Man’s anatomy not only prevented him from accomplishing any one undertaking but resulted in him breaking into his component parts and dying within one day of his release.

The experimental figure was buried at sundown with his tombstone noting that parts of him probably went to Heaven and parts of him probably went to Hell. In my opinion James L. Pearson did this type of fanciful Fool Killer tale better than the later Klarenc Wade Mak, covered previously here at Balladeer’s Blog. Mak had better overall premises but frequently you could barely tell that they were Fool Killer stories.

*** The Fool Killer targeted 71 year old Joseph Plummer of Milton, NH. For the past 40 years Plummer had refused to get out of bed because he was pouting over the way his father refused to let him marry the woman he loved. That woman had already passed away by this point, Plummer had lost the use of his legs and I don’t even want to KNOW what he did about bathroom breaks.

*** Some of the Fool Killer’s pithier comments this time around:

He implied the Supreme Court and monopolies like Standard Oil might as well be one and the same institution since the Court always seemed to rule in favor of Standard Oil.

“Labor creates all wealth – and then gives it to the deadbeats.”

“A woman who wants to wear breeches is a pantaloonatic.” (Pearson supported voting rights for women but for some reason women wearing pants REALLY bothered him.)

As I always say, it’s fascinating to read this old publication and its odd mix of viewpoints – even the ones you disagree with.

I WILL EXAMINE MORE FOOL KILLER LORE SOON. KEEP CHECKING BACK FOR UPDATES.