Richard C Meyer’s fantastic team of mercenary superheroes nicknamed the Jawbreakers are back in action! They’ve been called the new AVENGERS, the new JUSTICE LEAGUE and the new X-MEN, and with good reason.

Meyer aka Ya Boi Zack is the man who recently brought readers the spectacular Stallone graphic novel project THE EXPENDABLES GO TO HELL. He’s also the creative mastermind of the IRON SIGHTS series. However, his most popular creations remain the superheroes in JAWBREAKERS, this time with art by Aaron Alfeche, main cover by Kyle Ritter and variant cover by Meyer himself.

JAWBREAKERS: GRAND BIZARRE, the third installment of the superteam’s adventures, features never before revealed secrets regarding the group of mighty mercenaries plus the mind-blowing menace of the Grand Bazaar. Said Bazaar appears on Earth once every 66.5 years and is a more hardcore version of the kind of foes that the Justice League Dark and the 1970s Defenders fought.

The title, Grand Bizarre, is a play on Grand Bazaar, so no, that’s not a typo on my part. To order this latest volume of Jawbreakers excitement: 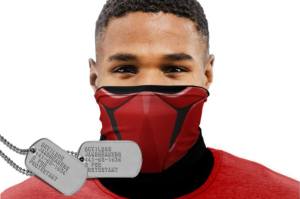 As usual, Meyer is offering assorted extras PLUS terrific Jawbreakers merchandise, or “Merc Merchandise” as Richard calls it.

Buy items like your own Jawbreakers dog-tags or – in the spirit of the times – a cloth Devil Dog half-mask.

Be sure to grab these latest pieces of independent comic book history!