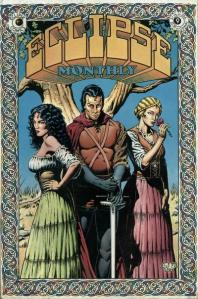 The story opens at the offices of The Daily Horn newspaper a day or two after the attack by the Architectural Terrorists. The staff is still grinding out their daily paper while repairs are done to all the damage inflicted during last issue’s battle.

The Masked Man (Dick Carstairs) is on-hand as Editor-In-Chief J Judah Johnson (a pastiche of J Jonah Jameson) assigns our hero’s reporter friend Barney McAllister to scour the city to see if any more members of the Architectural Terrorists are still at large.

Our hero and Dan Drekston, the world famous African-American journalist who is now working as the Masked Man’s Publicity Agent, invite themselves along with Barney. This leads to further conflict as Barney still resents Drekston for seeming to replace him as Dick’s friend and is disappointed in Dick for his willingness to sell out.

Drekston has arranged all manner of merchandising deals for the Masked Man – years before Ozymandias in The Watchmen – and Carstairs is preparing to move into a fancy new apartment on Palace & Vine. Dick and Barney resume their usual argument over the issue.

Meanwhile, Dan Drekston has used some of his big-time connections to help the Masked Man dig up some closely-guarded information regarding our hero’s enigmatic archenemy, the crimelord known only as Frankie. (Think part Professor Moriarty, part Kingpin and part Octopus from The Spirit.)

It turns out that in addition to running the individual Five Families Mafia clan he has taken over, Frankie is trying to obtain a mysterious item known only as the Reggiotoni. No one but Frankie knows what it is but it is worth a world-shaking amount of money.

On the drive to Dan Drekston’s place so Dick can sign the merchandising contracts, the trio spot the Joe Manfredi Gang of armed robbers holding up an electronics store. The Masked Man has Barney slam on the brakes and races into the store through the front window to attack the crooks.

The superhero’s battle with the six-man gang is a bit similar to his fight with the masked Incognito Gang back in The Bank Robbery, but while that story saw the Masked Man manage to corral the bad guys while simultaneously protecting all the innocent bystanders from harm, THIS time a woman named Maggie Brown is injured in the fray.

Maggie will become Dick Carstairs’ romantic interest in the issues ahead, but for this tale she is blinded from her injuries. The Masked Man, Barney and Dan wait at the hospital until the doctor allows them to visit the bedridden Maggie Brown.

The woman tries to assure our hero that her injuries weren’t his fault but he is plagued with guilt and promises to be at her side through whatever therapy and recovery process she will go through.

After the doctor tells them to leave, Carstairs, McAllister and Drekston drive to Dan’s swank apartment where he regales them with a few lofty references to his globe-spanning escapades. He’s trying to jolly Dick into signing the contracts on the desk but our hero keeps resisting, gripped with uncertainty.

He monologues his way through the situation, musing aloud to Dan about how far back his friendship with Barney goes and how McAllister has been more like a big brother to him over the years. While Barney tears up, our protagonist observes how his friend always reached out to help him at crucial times in his life.

He further observes that as hard as this merchandising opportunity has been for him to grapple with, it’s probably been harder for McAllister to refrain from saying anything this time, letting him decide for himself how to proceed.

The Masked Man turns down the lucrative deals, stating that he couldn’t bear to have his old friend think less of him after all they’ve been through. Dan Drekston is disappointed but accepts this.

Outside Dan’s place, Dick and Barney reconcile and become so moved that they hug each other. The story ends on a comical note as two old ladies arrive in the elevator and are shocked at what they think is two gay guys hugging. +++

I’LL REVIEW THE NEXT MASKED MAN STORY SOON. KEEP CHECKING BACK FOR UPDATES.

FOR MY LOOK AT STALKER, DC’s star-crossed Sword, Sorcery & Fantasy series from the 1970s, CLICK HERE