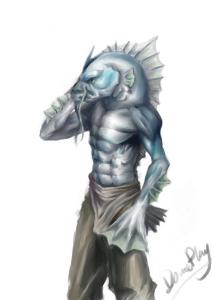 Picture by Doneplay at Deviant Art

THE SEA DEMONS (1916) by Victor Rousseau Emanuel aka H.M. Egbert. Set in contemporary times this story features Lt Donald Paget of the Royal Navy battling sea creatures. World War One is raging but Paget’s scientist friend Masterman warns him about invisible humanoid sea beings who are mutating into air-breathers.

Lt Paget remains skeptical even after he encounters Sea Demons going through the late Masterman’s papers to find out how much he knew about them. Not even Agent Scully would still be doubting the existence of the sea creatures by this point but Donald remains skeptical until he goes back on duty at sea where he and his crew encounter the Sea Demons in action.

Helping to convince our hero is the fact that the Sea Demons become visible after they’re killed. He and his crew lead the battle against the intelligent monsters, whose attacks on land-dwellers reach the point where the belligerent nations fighting World War One sign a hasty peace treaty to unite against the amphibious threat.

The sea creatures have developed a taste for human flesh, making them even more determined to conquer all territory above water. The Sea Demons can use their bodies to manipulate the waves in their war against humanity and things look pretty grim for awhile.

Eventually Donald Paget and his American fiancée Ida Kennedy learn that the Sea Demons are being controlled by a mad scientist named Professor MacBeard (shades of “Doctor Beardface” on Scrubs). In true mad scientist fashion, MacBeard wants the sea beings to wipe out humanity.

The dastardly Professor changes his tune when he gets the hots for Ida Kennedy. MacBeard offers to lead all of the Sea Demons into a trap to be killed in exchange for being given Ida as his concubine. The noble Miss Kennedy agrees, and Professor MacBeard coordinates his treacherous plans with Great Britain, the nation most anxious to destroy the sub-aquatic menaces.

Meanwhile the queen of the Sea Demons – who, just for titillation is a beautiful looking humanoid woman – falls in love with Lt Paget. With some involuntary help from said Queen the day is saved for humanity.

This story is kind of fun, in an old Republic Serial way, or, given the British setting, maybe I should say in a Quatermass or Doctor Who way. Jon Pertwee’s Doctor even tackled a bunch of subsea creatures called Sea Devils if I remember correctly. +++