Here’s a bonus Charlemagne post in honor of Twelfth Night. FOR THE FIRST CHAPTER ON CHARLEMAGNE’S PALADINS CLICK HERE 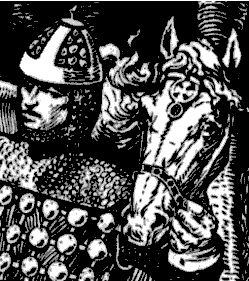 REINOLD, MAUGRIS THE MAGICIAN AND THE ENCHANTED HORSE BAYARD – Reinold was another of Charlemagne’s nephews, like the Paladin Roland. Reinold, also called Rinaldo, was the son of the Emperor’s sister Aya and her husband, Duke Aymon of Ardennes. Reinold’s sister Bradamante, covered previously at Balladeer’s Blog, was the white-armored Paladin in Charlemagne’s court, making her literally a “white knight.”

Reinold, like his three older brothers and his sister distinguished himself in battle and was knighted by the Emperor. Reinold, already showing the maverick streak that he would become famous for, declined a sword at the knighting ceremony, vowing that as one of Charlemagne’s Paladins he would carry a sword taken from the next adversary he bested in combat. 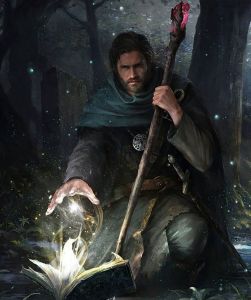 Once, while riding outside Paris, Reinold was presented with a magnificent suit of armor by Maugris the magician, the younger, more active counterpart to Merlin from Arthurian lore. (In some versions Maugris – aka Malagigi – also gives Reinold a horse, but since this tale centers around Reinold’s taming of the mount Bayard I’m omitting that to keep the story stream-lined.)

Not long after, Maugris the enchanter again appeared before Reinold, this time in the forest of Arden. Maugris told the young Paladin that a mightier steed than the one he currently rode was on the loose in the forest, killing everyone who tried to tame him.

Maugris went on to explain to Reinold that the horse, named Bayard, once belonged to Amadis of Gaul. After Amadis’ death, Maugris had cast a spell on the horse that granted it supernatural powers, making it impossible for the beast to be subdued by anyone except another Paladin as brave and capable as Amadis himself.

All the other Paladins that Maugris had sent to try taming Bayard had been killed by the horse. Reinold was undeterred by that knowledge and rode off toward the cavern lair of Bayard.

While riding through the forest, Reinold encountered Isolier, one of the Muslim Saracen colonialists who had seized Spain. This mounted warrior was also planning to risk his life in an attempt to claim Bayard as his own.

Reinold and Isolier fought each other for the honor of proceeding to Bayard’s cave, but after the battle remained deadlocked for quite some time, Maugris (presumably rolling his eyes and drumming his fingers) intervened. The magician told the two combatants to approach the cave together, since only one would likely survive the attempt to tame the enchanted horse.

The two competitors took Maugris’ advice and proceeded together to Bayard’s cave. The horse was not inside at the moment, but soon arrived, ramrodding his way through any bushes that were in his way. The animal was recognizable from the silver star pattern on its forehead.

Bayard locked eyes with Isolier first, and charged him. The horse kicked at the Saracen and tore at Isolier’s flesh with his teeth. The Saracen feared for his life and abandoned the notion of taming Bayard, preferring instead to kill him.

Isolier’s lance broke against the enchanted flesh of Bayard and the horse kicked the Saracen in the head, leaving him limp on the ground. Reinold rushed forward to try his chances at taming the beast.

Reinold grappled with Bayard for over an hour, dodging his snapping teeth and his powerful kicks, kicks which often felled the thickest trees. Repeated punches to Bayard’s mouth only angered him further and Reinold was hard-pressed to stay at the horse’s side, where he was safe from its bites and kicks.

At last the Paladin succeeded in throwing the horse to the ground on its side. As Maugris had said, immediately after being thrown down Bayard accepted his new master. Reinold affectionately patted the now-tame creature, then transferred his saddle and trappings from his previous horse to Bayard.

With Bayard as his mount, Reinold went on to a career almost as illustrious as his cousin Roland’s. +++

6 responses to “CHARLEMAGNE: REINOLD, MAUGRIS THE MAGICIAN AND BAYARD”