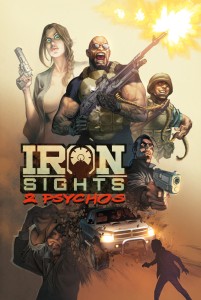 This 100 page graphic novel, titled Iron Sights: 2 Psychos, takes the action to Mexico. Like the first Iron Sights story, think of this like a Quentin Tarantino movie or the El Mariachi series crossed with Sicario and 100 bullets but served up in the inimitable Richard C Meyer style.

Meyer’s writing and the art by Ibai Canales already have customers lining up to reserve their copies, plus Richard is offering a special deal for those of you who missed the first Iron Sights book and want to order both the original and this new sequel.

Richard C Meyer is one of the comic book “Outlaws” going their own way to pursue their creative vision free of the corporate influence of the Big Two publishers.