THE WIZARD OF THE MOUNTAIN (1867): HALLOWEEN STORY 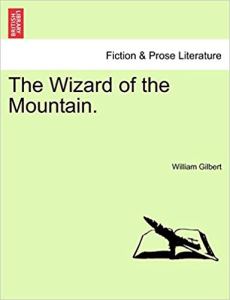 THE WIZARD OF THE MOUNTAIN (1867) – Written by William Gilbert, father of THE W.S. Gilbert.

This book centers around the wizard Innominato (“Nameless One”) in Italy during the 1200s. Though sometimes classed as a novel this is technically a collection of episodes or short stories centering around the customers of the Innominato.

These figures pay the feared wizard for his services but dark twists often befall the customers anthology show style. Here are the individual episodes:

THE DOCTOR ONOFRIO – An evil lawyer (the doctor of the title, as in juris doctorate) wants the Innominato to magically grant him wealth and a restoration of his youth. The wizard agrees but warns the lawyer to change his ways. If he doesn’t, every malevolent act he commits will age him. The vile man’s behavior quickly ages him to death.

THE LAST LORDS OF GARDONAL – A sleazy nobleman lusts after a beautiful peasant girl but in his feverish pursuit accidentally kills her. He wants the wizard to bring the girl back to life. The Innominato does … but she turns out to be a vampire.

THE ROBBER CHIEF – A bandit comes into conflict with our sorcerer. The magician serves up a very cold revenge that goes beyond the grave. After he is killed the dead outlaw’s ghost is mystically condemned to haunt a palace until he has done sufficient penance for all of his evil acts in life.

DON BUCEFALO AND THE CURATE – A clerk and a clergyman think they can manipulate the Innominato. The clerk wants the wizard to ease his nerves over some money he has obtained illegally. The priest wants a lot of money. Our main character pays off each of them with poetic justice.

THE PHYSICIAN’S DAUGHTER – A young lady eschews her father’s medical skills when the man she loves become seriously ill. She prefers to ask the Innominato to intercede with his magic instead. He gives her a plant which he says will cure her lover.

THE TWO LOVERS – When an unworthy suitor covets a beautiful woman the sorcerer calls upon his magical satchel. That satchel can transform stones into gold. From there the story takes an unusual twist.

FRA GEROLAMO – The title priest wants a fortune after a lifetime spent in penury because of his vocation. The Innominato obliges but this instance has a different sort of ending when Fra Gerolamo gets a religious (or is it) vision and renounces the fortune.

THE MAGIC FLOWER – A young lady wants to marry into a noble family but her intended’s snobbish father, a Duke, is opposed to the union. Our sorcerer gives the woman a magic flower which helps her in ways beyond what she desired.

TOMAS AND PEPINA – A loving but incredibly old married couple come to the Innominato asking him to restore their youth. The catch is that the wizard says he can only grant a youthful body to one of them and a youthful mind to the other.

THE STRANGER – A demonic figure begins haunting the Innominato’s mountaintop castle. Soon the sorcerer comes down with a terrible illness and lies near death. Has the demon come for his soul?

THE INNOMINATO’S CONFESSION – The book finishes up with “the senses-shattering origin” of our central character. When he was young he turned away from his plans to become a priest because of his interest in the occult. With help from an evil sorceress named Malatesta the young man gained mystical powers but had to swear off religion forever.

The ghost of his dead wife saved the Innominato from forfeiting his soul to the Devil through Malatesta’s machinations. Since then he has used his magic powers to help the worthy and to bring poetic justice to the wicked.

The Wizard of the Mountain reads almost like a Gothic Horror version of Tales From The Crypt with the Innominato as a kind of Crypt Keeper. This book is ideal for people who don’t really want a lot of blood and gore in their Halloween reading.

6 responses to “THE WIZARD OF THE MOUNTAIN (1867): HALLOWEEN STORY”