THE WOLF IN THE GARDEN: WEREWOLF STORY FOR HALLOWEEN 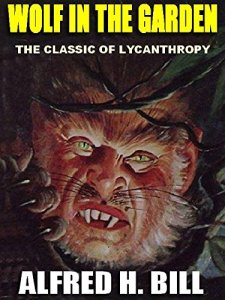 THE WOLF IN THE GARDEN (1931) – Written by Alfred Hoyt Bill. This neglected novel is ideal for people who go in for horror tales set long ago. In this case the 1790s.

New Dordrecht, a town in New York’s Hudson Valley, becomes the home of the fallen Count de Saint Loup, a French aristocrat fleeing the guillotine during the French Revolution. Anyone who remembers that “loup” is French for wolf will immediately know that this figure will be our title werewolf. (Though his deadly hound DeRetz is a red herring at first.)

The Count transferred much of his wealth before fleeing his homeland so he is initially welcomed as a prominent new citizen in New Dordrecht. Unfortunately Count de Saint Loup soon displays the overbearing, snobbish airs that drove the French underclasses to overthrow the aristocrats in the first place.

People who get on the wrong side of the former “aristo” start to turn up dead after getting attacked by a monstrous wolf-like creature.

Among the many enemies that the Frenchman makes is Farrier, who turns out to be the hero of the story. Their enmity grows more intense when Farrier’s beautiful (of course) cousin Felicity moves to the town and the pair fight over her affections (eewww).

Saint Loup’s wealth makes him the favored suitor in the eyes of Felicity’s greedy, status-conscious father. The romantic rivalry plays out as the werewolf’s killing spree continues.

Our hero finds an ally in the form of the local minister, whose studies in the occult have convinced him that the Count is a lycanthrope. The duo’s suspicions are shared by Felicity’s Haitian maid, Vashti, who knows folklore about killing Loup-Garous or werewolves.

Farrier and company set out to kill the Count in his lupine form and this cat and mouse game carries the story to its conclusion.

Fans of Anne Rice or of Gothic Horror in general should enjoy the 1790s time period, with the New York State location adding some novelty to the proceedings. In my view The Wolf in the Garden makes for fun Halloween Season reading.

28 responses to “THE WOLF IN THE GARDEN: WEREWOLF STORY FOR HALLOWEEN”