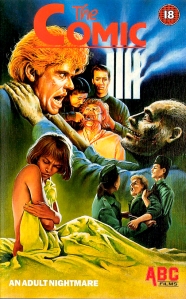 THE COMIC (1985) – Virtually every film buff today knows the tale of Sam Raimi, Bruce Campbell and Robert Tapert raising money from doctors, grocers and dentists in Michigan to finance their subsequent horror hit The Evil Dead.

Over in the U.K. Richard Driscoll raised money from Welsh miners and doctors to finance his very odd movie The Comic. Raimi and company went on to lucrative careers in the entertainment industry. Driscoll’s story did not have the same type of fairy-tale ending. Not even with an established figure like John Eyres helping out financially when Richard’s original funds ran out.

The Comic takes place “in another place and another time” according to one of the female characters. From appearances it’s a near-future police state in which fairly ambiguous laws are enforced by goose-stepping goons who wear their hair in ponytails. This film seems to be reaching for the heights achieved in cult films like Eraserhead and Café Flesh but falls so far short that it’s more like The Jar.

Writer/ director Driscoll also peppers in elements of MacBeth, Hamlet and King Lear but only succeeds in embodying the worst clichés of arthouse cinema. If this had been a latter-day student film or direct to video affair it would not deserve all the insults that reviewers throw its way. But if you’re cheeky enough to dump something like this on the theater-going public you’re just asking for a critical onslaught.

The Comic’s central character is aspiring stand-up comic Sam Coex, played by Steve Munroe, who has had a long and varied career. Believe it or not Munroe will be reprising his role as Coex in the upcoming film Grindhouse 2wo, directed by The Comic‘s Richard Driscoll. This time around it seems the emphasis will be on INTENTIONAL humor, so I’m looking forward to it.

Hell, Linnea Quigley plays Ilsa in that film, which will hopefully match the entertainment value of the original Grindhouse.

Meanwhile, back in The Comic, Sam Coex ruthlessly seeks a job as House Comic at a futuristic version of the old Music Halls. He plots and carries out the murder of the man who currently holds the job and gets his big chance. Part of Sam’s “A” material is about Pinocchio having sex, an old chestnut which made all of our grandfathers and great-grandfathers laugh.

A stripper becomes involved with Coex for some very odd sex scenes and for dialogue which is often obscured by the artsy sound effects being tossed in. By the way, Sam has hair that is Ronald McDonald Orange and looks like it was sprayed on by Earl Scheib. (Hey, if Coex can dredge up that Pinocchio joke I can throw in an Earl Scheib reference.)

Vintage cars and horse-drawn carriages are used for transportation so it’s possible the setting is also supposed to be post-apocalyptic as well as dystopic. People pay any price to get smuggled out of England and with the pony-tailed police beating and jailing anybody they want to on a whim you can see why.

The crutch of alternating flash-backs and dream sequences provide the usual “are  they being deep or just b.s’ing the viewers” appeal … or at least try to. Mostly you find yourself laughing for all the wrong reasons during this film.

Driscoll overdoes the fog and the wind sound effects and the special effects are lame in the extreme, but a few visuals stay with you. There’s a scene that’s all black & white except for our protagonist’s orange hair plus a baby delivery scene that surprises you in the end. I won’t spoil it.

Adding to the feeling that this movie is just “having us on” as our British cousins say is the fact that toward the end several early scenes are played again, padding out the film’s running time.

The Comic would be best appreciated if you are heavily into the “so bad it’s good” aesthetic. Otherwise you’ll be bored silly.

But hey, there’s Grindhouse 2wo to look forward to! +++