Eddie or Mr Wozniak or Balladeer or whatever you go by:

At present I’m here in Oregon smacking around Antifa scumbags. I fought the Democrat KKK thugs in the 1870s and I’ll be damned if I’ll let these masked Democrats prey on people. What is it with Democrats and hiding behind masks? Antifa’s name is nonsense. Like the old saying goes “The fascists of the future will call themselves anti-fascists.”

Anyway, since you and I are agreed that both Democrats and Republicans are criminals and worse I got to thinking about my last missive to you. That communication ended with me entering another period of hibernation on New Year’s Day 1900 after dealing with the town of Folly, Texas.

Like I mentioned then, my supernatural inheritance on my Daddy’s side causes me and my belongings to somehow transport back to my hidden cave til it’s time to wake up again. This time I woke up in early October of 1900 wearing that blue, buttoned outfit that lets me pass as anything from a boat pilot to a policeman – like in Facts for the Fool-Killer, that book from my time in and around Buffalo, New York.

I emerged from my cave, yawned, stretched and relished the crisp autumn air and then set out for Buffalo, NY. I mentioned last time that while I hibernate, events in the real world come to me like dreams, so I’m always up to date on the national zeitgeist. I also know where I’m meant to go when I wake up. 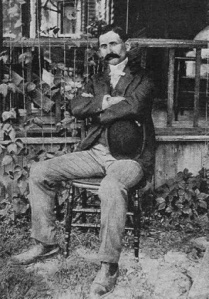 By mid-October, mostly using trains, my favorite means of travel, I arrived at Niagara Falls just as that Peter Nissen character made his final voyage in the custom boat he had named The Fool Killer. He and his First Mate were forced to abandon it in the dark and neither they nor any search parties ever found it.

That was because I stepped in after they had fled that night and hauled the boat free to commandeer it for my own use since Nissen had commandeered my name without my permission. With my more than human strength it was no real problem, of course.

I had brought along some of my Daddy’s eldritch tools from the days of his blacksmith business in the early 1800s and by daybreak I had improved on Nissen’s custom craft to make it suitable for my purposes. I could even pilot that boat up or down or behind the falls – though I usually waited until there were no prying eyes about for those particular maneuvers.

Anyway, I spent almost ten years dispensing justice to fools all along the Niagara River and Lake Erie.

I didn’t stick to just the waterways, of course. I often pulled into port and whacked fools in Buffalo, Lackawanna, Cleveland, Sandusky, Toledo, even Detroit. I kind of enjoyed the solitude of my ship in between escapades.

Looking like a cop was convenient, too. Just a change of headwear from my Pilot’s cap to my policeman’s helmet and back again and I was set on land and water.

I used my weapons on the usual wide variety of fools but my most persistent prey between October 1900 to around 1910 were the flood of incoming criminals from Italy. Beginning in the 1890s the actual goddamn Mafia had been taking root in Buffalo and vicinity.

By 1908 Angelo “Buffalo Bill” Palmieri was setting himself up as the “Don” of Buffalo. Remember when you reviewed Facts for the Fool-Killer and said I had a “steam-punk” look by then? I guess you’d call that period my “Steam-Punk Cop versus the Mafia Era.” Smuggling, Lake Erie piracy, you name it.

Some of the most large-scale battles I waged against those early examples of Organized Crime happened in and around Grand Island resorts like Bedell House, Sheenwater or the Oakfield with its steamer the Lorelei.

As my memory is jogged I’ll be happy to share specific reminiscences with you in future correspondence.

The only interruption to that period came in 1908 when O Henry conjured me to New York City by calling his friend a fool to his face four times in a row. After that situation was resolved I made my way back to Buffalo on foot, which was when I encountered that handful of fools to kill in Pennsylvania Dutch Country.

I WILL EXAMINE MORE FOOL KILLER LORE SOON. KEEP CHECKING BACK FOR UPDATES.